From 80 Percentile To IIM Rohtak: An Incredible CAT Journey 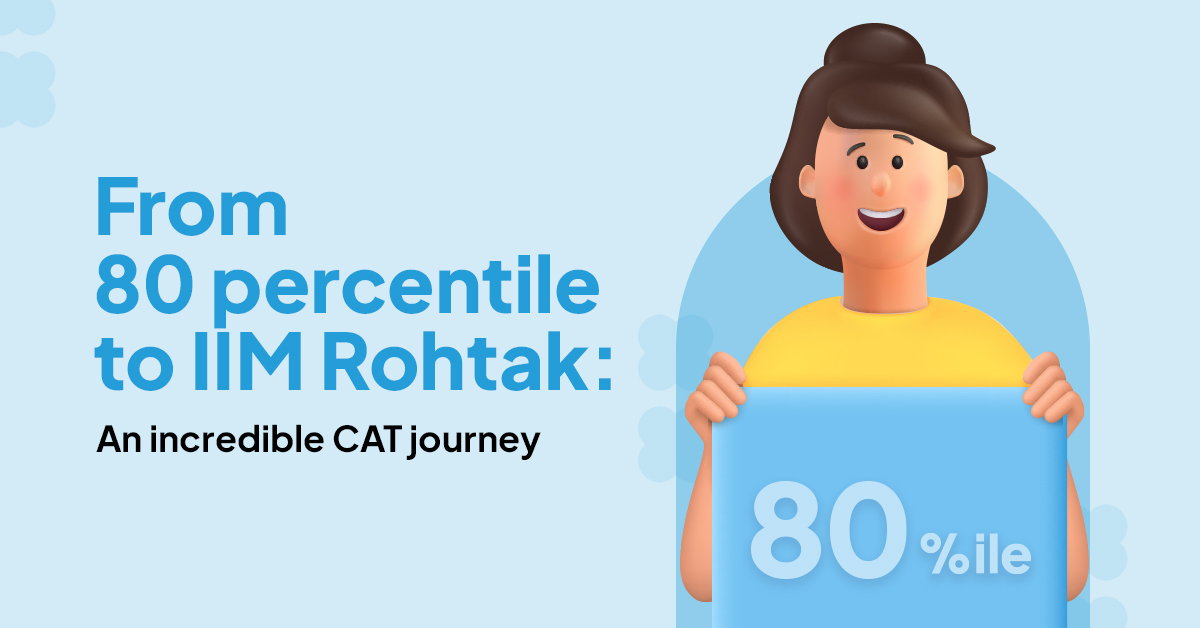 (The following blog is based on a true story. We hope that Mr. Palash Gupta’s CAT exam preparation journey inspires you, guides you in the right direction, and motivates you to put your best foot forward)

As a CAT aspirant, when people give you suggestions, share their opinions, and enlist tips and tricks, you wonder if they have been in your shoes; if they know what it means to be a CAT aspirant. We understand that the enthusiasm and positivism of someone who has been an aspirant before are contagious. So, we decided to share a story that will give you the confidence you seek.

Mr. Palash Gupta was an engineer in the making when he felt drawn towards the world of business and management. Now, he could have settled for a more easily achievable goal of acquiring education from any business school. But he chose to aim for the best institutions across the country because he wanted to have a career he could be proud of.

While pursuing engineering, he had found his passion, but he was yet to discover the direction. Palash appeared for the CAT 2015 without having adequately prepared for the exam and was inevitably disappointed after the result.

It’s important to understand that with every big dream comes a manual of rules and lessons that you cannot afford to overlook because when passion meets hard work, you get to redefine success in your own remarkable way.

What we all need to learn from his experience is that after scoring 88 percentile, he did not give up on his dream of walking into an IIM with pride. He, in fact, vowed to turn his big dream into a reality with a definite plan.

The next part of his journey is especially important for the ones who doubt that they would not be able to prepare for the CAT while doing a full-time job because they will get the hope they seek.

He started his preparation six months before the exam as a working professional. Palash planned things in a way that he was able to devote at least three hours a day in the initial phase of the preparation and gradually increased it to four to five hours. He had to burn the midnight oil, multitask, and ensure that he did not deviate from his plan. But the final outcome was worth the effort. So, if you are struggling today, doubting your ability to manage multiple things at one given point, do what Palash did; he set a motivational reminder for himself for every day!

He relied on multiple E-learning platforms for his preparation and appeared for many tests throughout the journey. In fact, in the last four months of his preparation, his life revolved around taking mock tests and analyzing his performance. The tests helped him conclude that accuracy in Verbal Ability was a weakness that he was required to work upon. So, he started practicing more and focussed on understanding the writer’s perspective. “Why is this correct and not the option I chose?”- He would work on clearly understanding the explanations of the questions he attempted incorrectly right after appearing for a given test.

His curiosity fueled him with the willpower he required to keep on practicing until he got better. He would read all genres of write-ups and books, including newspapers which also helped him stay updated. A couple of months into the preparation, ‘Inshorts’ replaced the newspapers, and vocabulary apps replaced books. But one thing remained constant throughout his expedition- perseverance.

He takes pride in admitting that he did not compare his performance graph with that of his friends and just continued working on excelling. He believes that the key to staying motivated lies in having just the right amount of confidence in your plan. And we could not agree more!

Palash says that he, like most people, likes to depend upon resources that involve minimum hassle, can be used as easily as Instagram, and are literally just a click away. However, the ride was not as smooth and convenient as he wanted it to be. When he was preparing for the exam, he did not have access to recorded lectures.

While balancing working with dedication and preparing for the CAT 2016 well, he often had to miss some classes. Moreover, he could not test his knowledge and understanding of a specific topic and was bound to wait for complete tests.

When he learned about PrepLadder’s customizable question bank and high-yield tests, he could not help saying- “ I wish I had the choice to use an app as student-friendly as this!” Since he was multitasking, he wanted to learn things at his own pace, understand concepts, and march forward just as he wanted to.

Despite the challenges, he successfully moved closer to his dream, one day at a time, one test at a time, one doubt-solving session at a time. He did not stop until he finally reached IIM Rohtak after nailing the CAT 2016 with 98.3 percentile. He wanted to become a better version of himself, and he became that!

Looking back, he does wonder how things would have been better if he could use an app like PrepLadder, but he is content that he made the most of the resources available to him because today, he is the man he once aspired to be.

If Palash could do it, so can you!