All You Need to Know About Nobel Prize 2022 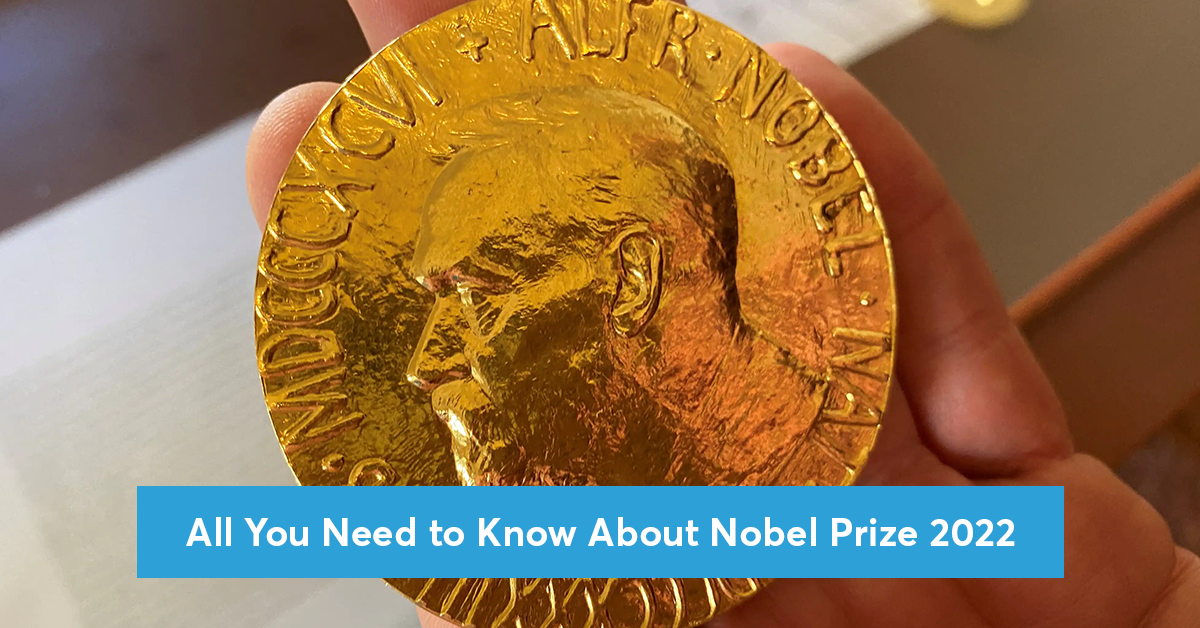 Our today's edition of Current Affairs is here. Read to know more about Nobel Prize 2022. Also, find the topic's relevance to the UPSC CSE syllabus below:

Nobel Prizes and Economics Awards are being announced between 3rd to 10th October 2022. The laureates will be given their due awards in December 2022.

What is this years Nobel Laureate Dr. Pääbo’s Research about? Write a brief note on findings of the research and its applications.

About Nobel Prizes and Economics Award

● Nobel Prizes were established by the will of Alfred Nobel.
● Alfred Nobel was a wealthy Swedish industrialist and the inventor of dynamite.
● The Nobel Prizes are given in five categories;
● Medicine,
○ Physics,
○ Chemistry,
○ Literature and
○ Peace
● The first awards were handed out in 1901, five years after Nobel’s death in 1896.
● Six days, Six prizes will be announced starting from 3rd October Monday for Medicine, Physics on Tuesday, Chemistry on wednesday, Literature on wednesday, Peace on Friday.
● This year, each prize is worth 10 million kronor (nearly $900,000) and will be handed out with a diploma and gold medal on December 10 which is the date of Nobel’s death.
● The Nobel Peace Prize is presented in Norway while the other awards are handed out in Sweden. That’s how Alfred Nobel wanted it.
● The economics award wasn’t created by Nobel, but by Sweden’s central bank in 1968.
● The Economics award is officially known as the Bank of Sweden Prize in Economic Sciences in Memory of Alfred Nobel.
● Between 1901 and 2021, the Nobel Prizes and the prize in economic sciences have been awarded 609 times.

Secrecy of the process

● The Nobel statutes prohibit the judges from discussing their deliberations for 50 years.
● It's probably going to be a while before we know for sure how judges made their picks for
2022 and who was on their short lists.
● The judges try hard to avoid dropping hints about the winners before the announcements, however sometimes word gets out.

Nominations of the Candidates

● Thousands of people around the world are eligible to submit nominations for the Nobel Prizes.
● They include university professors, lawmakers, previous Nobel laureates and the committee members themselves.
● Although the nominations are kept secret for 50 years, those who submit them sometimes announce their suggestions publicly, particularly for the Nobel Peace Prize.

The 2022 Nobel Prize for Physiology or Medicine has been awarded to Swedish geneticist Svante Pääbo for his research in the field of genomes of extinct hominins and human evolution.
About Dr. Pääbo’s Research
● Dr. Pääbo’s groundbreaking research attempts to answer questions about human evolution.
● Dr. Pääbo’s research has resulted in the rise of a new scientific discipline called paleogenomics, which is the study and analysis of genes of ancient or extinct organisms.
● He was able to sequence the genome of Neanderthal, a species of humans that existed on the earth and went extinct around 30,000 years ago.
● He also discovered ‘Denisova’, a previously-unknown hominin.
● Hominins refer to the now-extinct species of apes that are believed to be related to modern humans.
● Dr. Pääbo’s research led him to the conclusion that “gene transfer had occurred from these now extinct hominins to Homo sapiens following the migration out of Africa around 70,000 years ago”.
● Studying extinct species’ DNA is not an easy task. Over time, DNA tends to degrade and become chemically modified. Since Neanderthals became extinct 30,000 years ago, only trace amounts of their DNA would have been left in fossils, if any.

● Neanderthals
○ Neanderthals are the closest relatives of the present-day human species.
○ They lived in Europe and West Asia as far as southern Siberia and the Middle East.
○ They disappeared around 30,000 years ago.
● Denisova
○ In 2008, Dr. Pääbo’s team sequenced the DNA from an “exceptionally well-preserved", 40,000-year-old fragment from a finger bone found in the Denisova cave in Siberia.
○ This DNA sequence turned out to be unique and different from all-known sequences from Neanderthals and present-day humans.
○ The previously-unknown hominin Denisova was thus discovered.
● Homo Sapiens are the species of modern-day humans.
● Comparisons with sequences from contemporary humans from different parts of the world showed that gene flow, or mixing of genetic information among a species, had also occurred between Denisova and Homo sapiens.
● Evidence of such mixing was first seen in populations in Melanesia (near Australia) and other parts of SouthEast Asia, where individuals carry up to 6% Denisova DNA.
● The Denisovan version of the gene EPAS1 confers an advantage for survival at high altitudes and is common among present-day Tibetans.