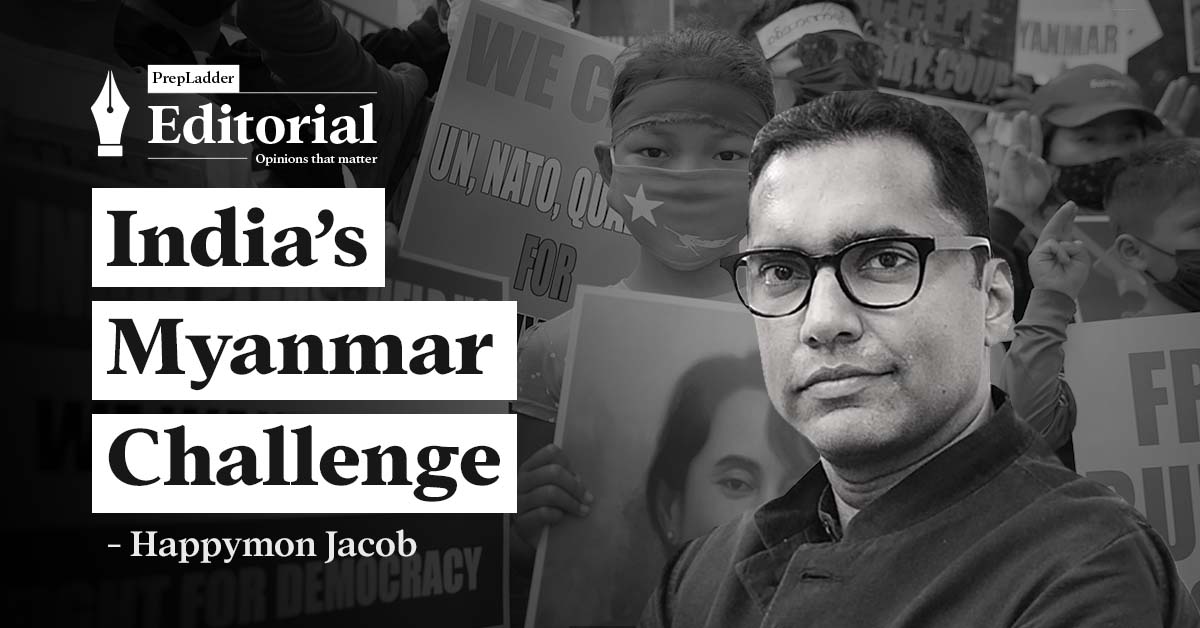 India is faced with a unique challenge in Myanmar, a country that is currently ruled by a junta which took the reins of power in the country in February last year. While India’s policy of ‘least resistance’ towards Myanmar will only further strengthen the hands of the brutal military regime in Naypyidaw, New Delhi may have little choice but to refrain from taking any measures against the military, direct or indirect. Gone are the days when India offered support to the pro-democracy movement in Myanmar especially after the 1988 crackdown by the Tatmadaw (another name for Myanmar military) on the pro-democracy movement in Myanmar. The rise of China and the resultant Sino-Indian competition in the South Asan region, in my opinion, is the primary factor shaping India’s policy towards the February coup in Myanmar.

The recent visit of the Indian foreign secretary Harsh Shringla and the Indian outreach to Myanmar must be viewed in this broader geopolitical context. But before we examine the change in India’s policy towards Myanmar’s military rulers, let us consider the question as to whether India has virtually offered recognition to the Myanmar junta. Has India provided de facto recognition to the military regime in Myanmar? Yes, it appears to be the case. Consider the following.

Immediately after the February coup, the Ministry of External Affairs issued a statement which stayed away from condemning the coup. It merely stated that the Indian government had “noted the developments in Myanmar with deep concern.” To be fair, New Delhi has issued statements supporting “the restoration of democracy in Myanmar” and condemning “any use of violence” in the country. But the policy direction clear.

Yet another direct indication that New Delhi was not going to go against the military regime in Myanmar was its decision to attend Myanmar’s Armed Forces Day on March 27, 2021, an act it justified as ‘protocol’. Apart from these rather direct policy postures, there have also been indirect indications of the Indian neutrality towards Myanmar. For instance, in March this year, the Home Ministry in New Delhi asked the states of Arunachal Pradesh, Manipur, Mizoram, and Nagaland to take “appropriate measures” to stop the inflow of Myanmar refugees from neighboring Chin State to India’s northeast, an order that didn’t go down well with the state governments. But New Delhi’s intent was unambiguous: This was done to placate the military junta since the junta thinks that the Burmese refugees in India’s northeast would pose an armed opposition to the coup leaders. Finally, reports indicate that the coup in Myanmar hasn’t stopped India’s public sector defence manufacturers from selling weapons to the Myanmar military.

Viewed against this background, the visit of foreign secretary Shringla to Myanmar is yet another indication of New Delhi’s de facto support to the military rulers in Myanmar. Let me put that differently: New Delhi will deal with whoever is in power in Myanmar without moral qualifications.

Understanding The Rationale Behind The Indian Strategy

Let us now try and understand the Indian rationale behind the de facto recognition of the military rulers in Myanmar. For sure, there is consensus among India’s Myanmar watchers that the February coup has deeply complicated India’s options in Myanmar. Despite Aung San Suu Kyi’s mishandling of the Rohingya issue which led to a refugee influx into India, New Delhi was in a great position vis-à-vis the country as it was able to work with both the power centres in Myanmar and was also better placed than China given how the Myanmar military wasn’t very close to Beijing. The coup undid this comfortable position India had vis-à-vis Myanmar.

As pointed out above, the most significant factor shaping India’s response and now policy towards Myanmar is china. Hypothetically speaking, therefore, if China was not a factor in the India-Myanmar equation, India might have adopted a more nuanced policy towards the coup in Myanmar. Put simply, if India adopts a harsh tone towards the coup leaders in Myanmar, Myanmar will get closer to China, and Beijing will indeed see this as an opportunity to displace India from the presence it has in the country today. Put differently, Myanmar has options, and both China and India realize that.

The second reason India has adopted a softer approach is due to the challenges it faces in the country’s northeastern region. A complicated relationship with Myanmar could increase the challenges of insurgency for India. India shares a porous 1,600-km border with Myanmar. Over the past few years the Myanmar military has been helping India to go after insurgents active on the Indian side (who take shelter across the border in Myanmar) which has immensely helped India in dealing with the challenge of insurgency.

Given this background, if the junta decides not to help India go after Naga and Manipuri insurgents based in Myanmar or give them refugee there, it would embolden the insurgents. More so, there have been reports that the Myanmar military has of late been using the anti-India rebels on its territory to fight anti-junta groups based along with the border areas. If these reports are accurate, India would have a major problem. This issue would definitely have been on Shringla’s agenda when he visited Myanmar last month.

Thirdly, the current global and regional contexts hardly encourage a pro-democracy, anti-coup interventionist approach towards Myanmar. The hasty withdrawal of the US from Afghanistan has dampened any last hopes that Washington DC would be interested in proactively pushing back the Myanmar military. The assistance that the Myanmar military receives from China and Russia has further emboldened the regime. While ASEAN has been critical of the regime, individual members of the grouping have been conciliatory towards the military. UN may not also be in a position to decidedly act against Myanmar given the veto powers held by the junta’s friends: Russia and China. Finally, given that the military regime has little external interests, international sanctions on the regime’s leaders may not work either. In short, the global and regional contexts do not provide a conducive atmosphere for taking the military regime to task. Given such a context, if India takes a proactive anti-coup stand, it might find itself without too many supporters.

Four, unlike China which is often spoken of as a `non-resident power’ in the region, India has been at the receiving end of regional conflicts from a humanitarian perspective. India already has around 40000 Rohingya refugees on its soil and now thousands of non-Rohingya refugees from Myanmar have arrived in the country after the coup. If India actively supports the various anti-regime forces in Myanmar, it could lead to further unrest and a humanitarian burden on the country.

Finally, Myanmar is an important piece in India’s Act East and Indo-Pacific strategies both of which are crucial for India to effectively meet the China challenge.

India has therefore opted to choose the path of least resistance in Myanmar preferring an interest-based approach to the situation there.