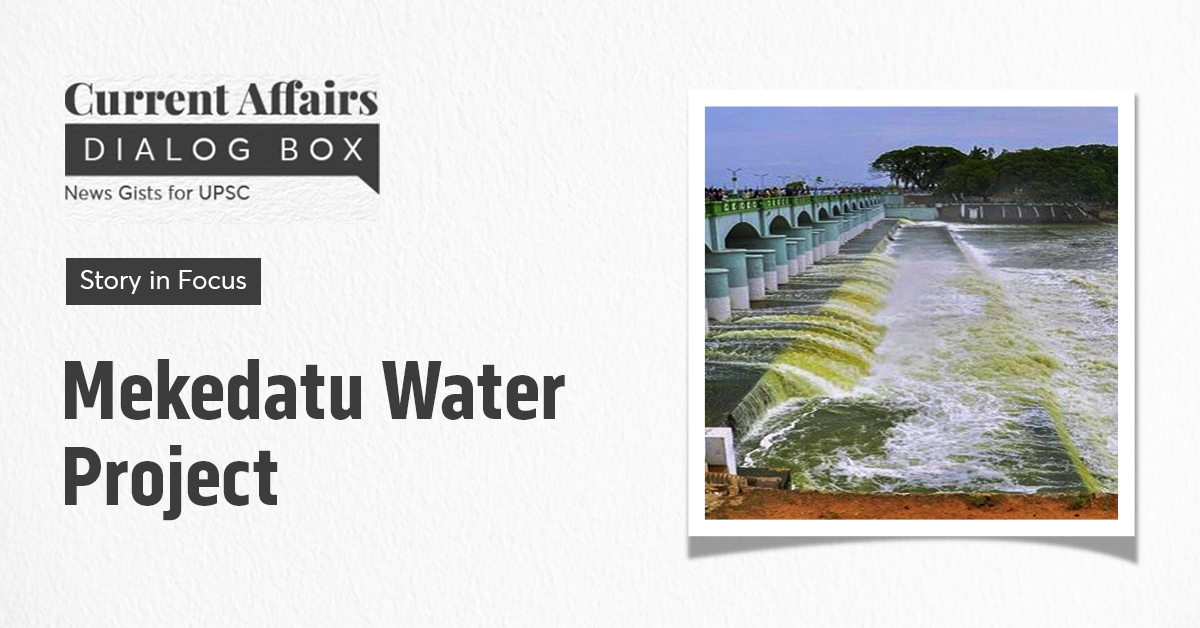 Today's edition of the Current Affairs Dialog box will comprise a discussion on Mekedatu Water Project and its relevance to the UPSC CSE syllabus. This topic forms an integral part of the UPSC exam preparation and should be studied in depth in your UPSC coaching.

For Mains: Views of Karnataka and Tamil Nadu Government, Conclusion.

Click here to read yesterday’s edition of the Current Affairs Dialog box, in case you missed it.

Recently, the Tamil Nadu assembly unanimously passed a resolution condemning the Karnataka government for its ‘unilateral decision’ to construct the Mekedatu dam across the river Cauvery.

The resolution of Inter-State water disputes is a test of the effectiveness of Cooperative Federalism. Comment

What do the Cauvery Water Disputes Tribunal and the Supreme Court say?

Q1. What is mekedatu project in kannada?

Ans. Mekedatu is a proposed dam project on the Cauvery River in the Indian state of Karnataka. The project aims to construct a dam and hydroelectric power generation facility across the river at Mekedatu, which is located between the towns of Kanakapura and Ramanagara, about 100km west of Bengaluru. The project has been a source of contention between the states of Karnataka and Tamil Nadu, as both states claim rights to the water of the Cauvery river.

Q2. What is Mekedatu Falls?

Ans. Mekedatu Falls is a natural waterfall located on the Cauvery river in the Indian state of Karnataka. It is situated between the towns of Kanakapura and Ramanagara, about 100km west of Bengaluru. The falls are a popular tourist destination known for their scenic beauty and the opportunity for adventure activities like rafting and trekking. It is not related to the proposed Mekedatu Dam Project.

Q3. What is Mekedatu Sangama?

Ans. Mekedatu Sangama is a place where the Arkavathi and Cauvery rivers meet and form a confluence. It is located in the Indian state of KarnATAKA, between the towns of Kanakapura and Ramanagara, about 100km west of Bengaluru. Mekedatu Sangama is a popular spot for tourists and locals alike, known for its scenic beauty and opportunities for activities such as rafting, trekking, and swimming. It is also a pilgrimage site for Hindus, as it is believed that a dip in the confluence of the rivers can wash away one's sins.