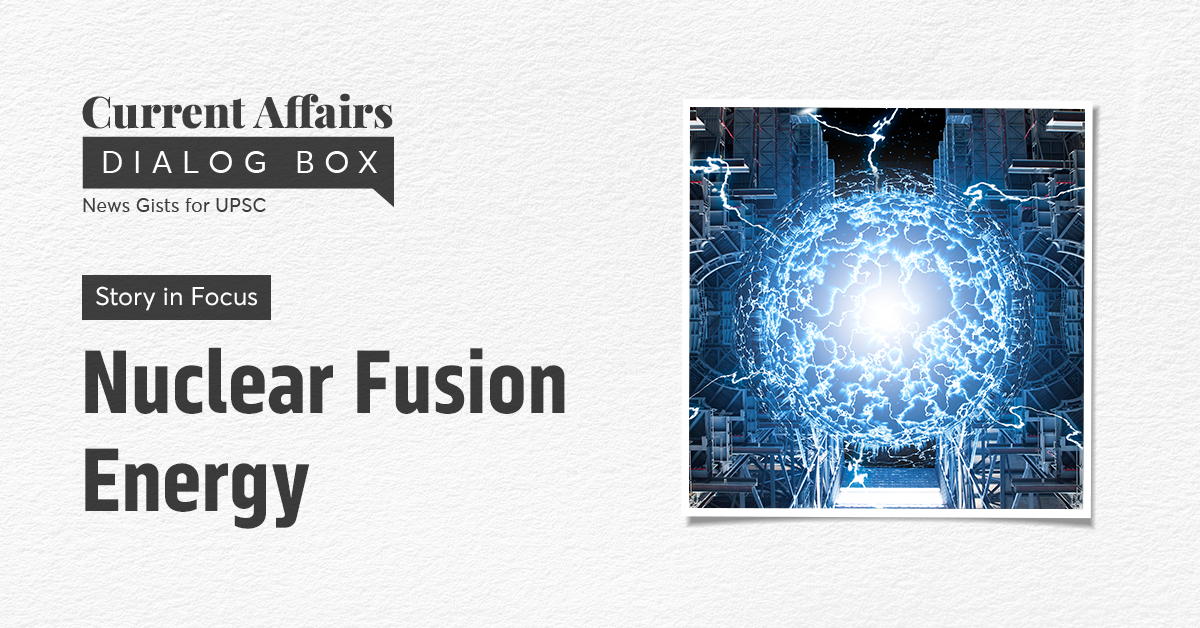 To enhance your UPSC exam preparation, in today’s series of our Current Affairs Dialog box, we will be discussing Nuclear Fusion Energy and how it is linked with CSE preparation.

Recently, Scientists in the United King­dom have achieved a new milestone in producing the largest amount of energy so far from a nuclear reaction, imi­tating the way energy is pro­duced in the sun.

● This result is being seen as a major breakthrough in the ongoing global efforts to produce a fusion nuclear reactor.

Examine the challenges associated with tapping India's nuclear energy potential and suggest some measures to overcome them.

● A team at the Joint European Torus ( JET) facility near Oxford in central En­gland generated 11 megawatts of energy over a five-second period.

○ This is more than double what was achieved in similar tests back in 1997.

● The JET experiments put us a step closer to fusion power.

● The record and scientiﬁc data from these crucial expe­riments are a major boost for the ITER, the larger and more advanced version of the JET.

● The energy was produced in a machine called a tokamak, a doughnut­shaped apparatus. The JET site is the largest op­erational one of its kind in the world.

● At the much lower pressures that are possible on Earth, temperatures to produce fusion need to be much higher - above 100 million Celsius.

● Deuterium and Tritium, which are isotopes of Hydrogen, are heated to tempera­tures 10 times hotter than the centre of the Sun to create plasma.

○ In the core of the Sun, huge gravitational pressures allow this to happen at temperatures of around 10 million Celsius.

● This is held in place using superconductor elec­tromagnets as it spins around, fuses and releases tremendous energy as heat.

Also, watch a related video on Technology Safeguarding Nuclear Reactors in India by Sharad Tripathi Sir, the faculty for Science and Technology:

Nuclear fusion is defined as the combining of several small nuclei into one large nucleus with the subsequent release of large amounts of energy.

● Scientists have been making efforts to build a fusion nuclear reactor for several decades, but the challenges are high.

● Over the years scientists have been able to draw up the plan for a fusion nuclear fission reactor.

● It is called ITER (International Thermonuclear Experimental Reactor) and is being built in southern France with the collaboration of 35 countries, including India.

● Fusion is possible only at very high temperatures, of the order of a few hundred million degrees Celsius, the kind of temperature that exists at the core of the Sun and the stars.

● The materials that will make up the reactor, need to be able to withstand such huge amounts of heat.

● At such high temperatures, matter exists only in the plasma state, where atoms break up into positive and negative ions due to excessive heat.

○ Plasma has a tendency to expand very fast and is extremely tough to handle and work with.

● The achievement is being hailed as a milestone and has shown the potential of fusion to deliver safe and sustainable low-carbon energy.

○ It is also being seen as an answer to the problem of climate change.

● Sustainability: Fusion fuels are widely available and nearly inexhaustible. Deuterium can be distilled from all forms of water, while tritium will be produced during the fusion reaction as fusion neutrons interact with lithium.

● Abundant energy: Fusing atoms together in a controlled way releases a large amount of energy. A kg of fusion fuel contains about 10 million times as much energy as a kg of coal, oil or gas.

● Limited risk of proliferation: Fusion doesn't employ fissile materials like uranium and plutonium. There are no enriched materials in a fusion reactor like ITER that could be exploited to make nuclear weapons.

● Low Risk of Accident: A Fukushima-type nuclear accident is not possible in a tokamak fusion device. It is difficult enough to reach and maintain the precise conditions necessary for fusion—if any disturbance occurs, the plasma cools within seconds and the reaction stops.

● Raw Materials: The raw materials are in sufficient supply and it produces much less radioactive waste compared to fission and is considered much safer.

○ A very small amount of raw material - deuterium and tritium nuclei, to begin with, can produce a very large amount of energy in a clean manner.

For more informative articles like this, download the PrepLadder app and get access to well-structured and the most comprehensive study material for Civil Services exam preparation. You can also join our Telegram channel for UPSC exam preparation to apprise yourself with the latest information about the exam