The Political Turmoil in Sri Lanka 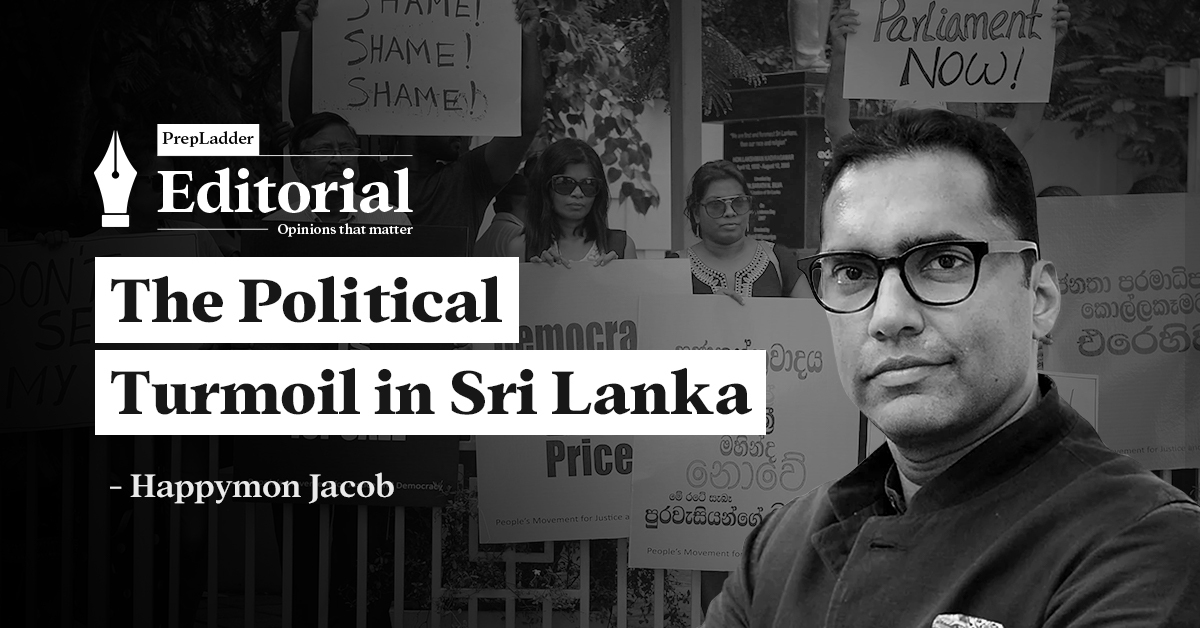 Sri Lanka is in the middle of a severe economic and political crisis. The government of Sri Lanka, ruled by the Rajapaksa family, is on the verge of collapse thanks to widespread protests across the country. With daily essentials such as food, fuel, medicine and electricity becoming increasingly scarce in the Island nation in the Southern Indian Ocean, the calls for the resignation of the Rajapaksa family-led government are under immense pressure to resign.

Let us briefly examine the origins of the current crisis in Sri Lanka. The root causes of the current crisis emerged over a decade ago when Sri Lanka’s original doners such as the US, Japan, IMF etc. stopped their economic support to Colombo due to the ruthless manner in which the Sri Lankan military under orders of the then president Mahinda Rajapaksa (who is currently the prime minister) decimated the Tamil rebels, killing scores of innocent civilians in the process. This was also the time when China was making its move in Sri Lanka since India was unwilling to support Sri Lanka’s war against the LTTE. The help from China meant two things: Colombo didn’t bother to carry out the much-needed economic reforms in the country, and two, it also led the country into a debt trap set up Beijing.

Then came the Easter Sunday bombings of 2019 which all of a sudden scared away tourists coming into the idyllic island destination. The country’s tourism revenue, for instance, was USD 4.38 billion in 2018 which fell to USD 3.59 billion in 2019 – this is a big deal for a country over 12 per cent of whose GDP is dependent on tourism. Things got worse in 2020 and 2021 due to the COVID 19 pandemic. This was further exacerbated by the government’s economic mismanagement. At a time when the economy was doing badly, the Rajapaksa government decided to reduce the government’s tax revenue substantially, as a populist measure. That didn’t end well either. Two more shocks were in the offing.

In April 2021, the Sri Lankan government imposed a complete ban on the import and use of chemical fertilizers citing health risks. The thoughtless and overnight ban plunged the farmer community into distress which was followed by farmer protests complaining of fertiliser shortage.

Then came the Russian war in Ukraine: Many of Sri Lanka’s tourists have been coming from countries like Ukraine and Russia. According to a report in Al Jazeera, Russia and Ukraine brought in around 25 per cent of international arrivals in Sri Lanka between January and mid-February this year. Russian misadventure in Ukraine halted that. Russian war also meant two other things: the Sri Lankan Rupee started falling against the US dollar, and rich Western states and the US, who might have come to Colombo’s aid during the current crisis are focused elsewhere: helping Ukraine fight a war for its survival.

This unfortunate mix of past deeds, mismanagement, and sheer bad luck had a combined effect on the Sri Lankan economy leading to fast-draining foreign reserves, trade deficit, and a Balance of Payments problem. There were fears of a sovereign default in late 2021, which Sri Lanka averted but it may be looking at another one soon.

So today, Colombo has little money in the state exchequer and as a result, it is unable to sustain the important-dependent country’s needs. While the government is definitely at fault here, one is unsure how a change of government will be able to make things any better. In short, we are looking at a bad situation in Sri Lanka getting worse by the day.

Over the past decade or so, India and China have been competing for influence in Sri Lanka. For New Delhi, it is important to ensure that Beijing doesn’t get a strategic foothold in Sri Lanka which Indian policymakers consider will end up hampering the country’s interests in the Indian Ocean region. China, of course, thinks differently. China doesn’t consider the Indian Ocean as India’s ocean and has been wooing Colombo to give it more and more space in the island nation of 22 million people many of whom have ethnic and religious ties with India. While China has the money to influence Sri Lanka, India has deep historical linkages and proximity on its side.

Due to several recent controversies, China has been receiving a lot of bad press in Sri Lanka, something New Delhi has been cleverly using to its advantage.

During the current economic crisis, however, both India and China have been offering aid and assistance to Colombo. There has been a great deal of diplomatic activity between Colombo and New Delhi in the recent past, especially since the onset of the crisis. New Delhi has been helping Colombo through loans, credit lines, jet fuel, and emergency medicines, among others.

For Colombo and the Sri Lankans, this is a major economic crisis. Beijing is rethinking its strategy in Sri Lanka for its mercantilist policy in the island nation and is perhaps not giving the strategic and economic dividends it expected from there. For New Delhi, this is an opportunity to help a needy neighbour thereby repairing its damaged relations with the country. In a sense, Sri Lanka is a test case for Indian playmakers: If it plays its cards well, it will be able to strengthen its relations with Sri Lanka and could potentially offset some of the strategic challenges posed by china there.

Sri Lanka may be a small state, but it is geographically too close to India for New Delhi to ignore it. An entrenched Chinese presence there, which was rising before the current crisis hit the country, will undoubtedly hurt our national security interests in the region. There is another important reason why India should redouble its efforts to help Colombo: Every small state in South Asia is watching the crisis in Sri Lanka to see how the two major players in the region – India and China – are responding to it. India must set the correct example.

Significance of the Modi-Kishida Summit