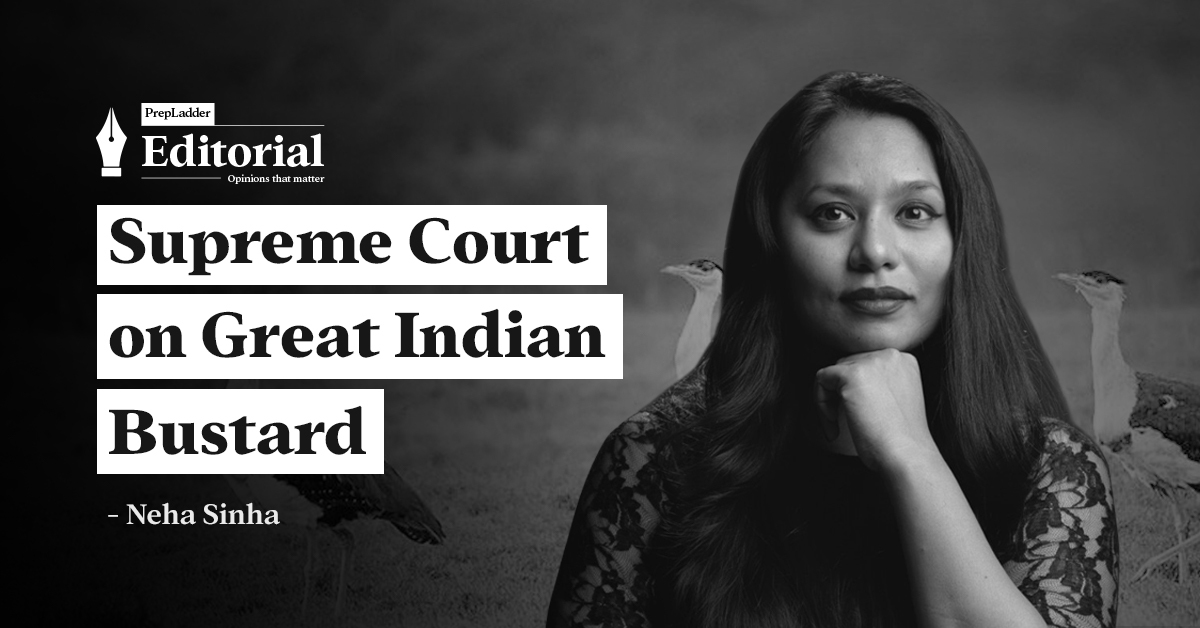 The Great Indian Bustard (GIB) is a critically endangered bird that is a flagship species of arid (dry) and semi-arid grasslands. The GIB is known as Godawan in Hindi— and is Rajasthan’s state bird. The GIB has been around for a long time, and it finds mention in the Baburnama. It is uniquely evolved to withstand the heat and dust of the desert as well as hot grasslands.

With a weight of almost 20 kilos, the GIB is one of the world’s heaviest flying birds. In 2020, India hosted the United Nations-led Conference on Migratory Species (CMS) in Gujarat. For this important Conference of Parties, the government of India chose the Great Indian Bustard as its mascot. At this conference of Parties, an international action plan for the GIB was also finalized.

Once in the running for National bird of India, today there are only about 100-120 GIB left. Historically the bird was found in Karnataka, Uttar Pradesh, Madhya Pradesh, Maharashtra, Andhra Pradesh but now is primarily found in Gujarat (Kutch area) and Rajasthan (Thar desert). The bird has faced massive habitat loss, because grasslands as an ecosystem are severely threatened today, turned into housing, chemical-laden agriculture or industrial zones.

But another threat that has also emerged for the GIB is high tension powerlines. The bird tends to fly low and has a restricted field of vision. As a result, they collide with high tension wires and die of injuries. Several GIB have died like this in the last few years – the latest being one in Jaisalmer in April 2022.

High tension power lines are coming up rapidly in Gujarat and Rajasthan because several new solar and wind power projects are coming up there. At UNFCCC Climate COP26 in Glasgow last year, Prime Minister Narendra Modi’s announced a ‘Panchamrit’ solution. By 2030, he said we will produce 50 percent of our energy through renewable power. By then, the plan is that we will also reduce 1 billion tonnes in projected carbon emissions.

Thus, renewable energy like solar and wind power is set to grow and has been growing for the past many years. Yet, such growth cannot come at the cost of endangered species. Apart from the Great Indian Bustard, many other birds (such as the Lesser Florican, another kind of Bustard) will also be affected by the powerlines. The Thar desert is used by 14 Threatened and 65 migratory species of the Central Asian Flyway. Several birds like vultures, kites, and eagles have died after colliding with wires in these areas.

In April 2021, In W.P 838 of 2019 in M.K Ranjitsinh vs Union of India, the Supreme Court has directed all agencies to underground all power lines in priority and potential GIB areas of Rajasthan and Gujarat within a year, and until that time, install diverters on these lines. As per the order, power lines should be laid underground straight away if there is no concern over their technical non-feasibility. However, for undergrounding of high-voltage lines, for which technical non-feasibility may be of concern, the court has constituted a committee for examining the technical feasibility of such actions on a case-to-case basis, based on submitted reasons/reports.

However, several constructions of power lines have continued even after this case in contempt of the Court order. In April 2022, a year from the April 2021 order, the Supreme Court made the following observation:

“The injunction which has been imposed in the order of this Court from the installation of fresh overhead transmission lines, save with the approval of the Committee, shall be scrupulously enforced. The Committee has stated that it has received reports in regard to the ongoing installation of power lines despite the directions of this Court. The States of Gujarat and Rajasthan as well as private power producers shall ensure that there is no breach of the directions of this Court. As already noted earlier, the feasibility of and need for installation of fresh overhead transmission lines is being examined by the Committee on a case to case basis and hence, applicants have sufficient remedies in the first instance to approach the Committee, and thereafter move this Court, if there be any subsisting grievance.

The States of Rajasthan and Gujarat as well as all power producers in the private domain shall ensure that within the priority areas, a comprehensive exercise is completed within a period of three weeks to assess (i) the total length of transmission lines; and (ii) the estimated number of bird diverters required for the purpose…

Necessary steps shall be taken immediately thereafter for ensuring that the time schedule of completing the installation of bird diverters in the priority areas associated with the Great Indian Bustard and Lesser Florican is observed by all power producers in Gujarat and Rajasthan.”

With the latest Court order, it is important that illegal construction in the last year be reviewed, and taken down. Time is running out for the Great Indian Bustard and many other threatened dryland birds. The government could seriously consider rethinking solar projects and making billions of rooftop installations for solar, utilising homes and currently used industrial areas. It can also use the proven experience of taking power lines underground in Thar and Kutch as an immediate and high priority measure.