Why India Should Have Mediated Between Ukraine and Russia 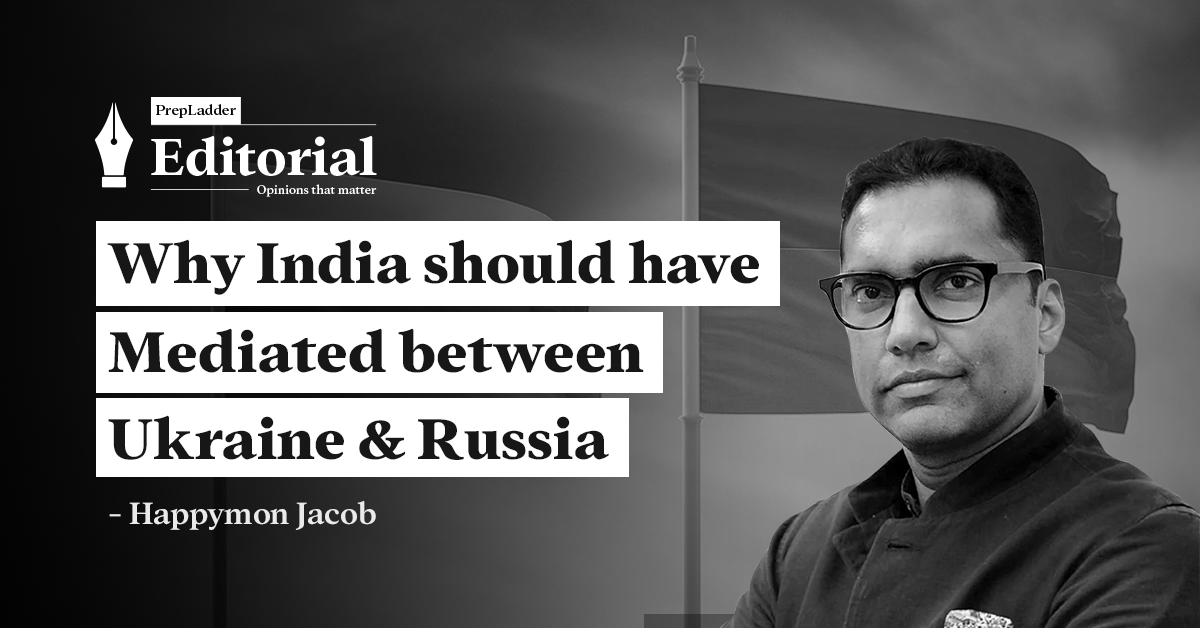 Israeli Prime Minister Naftali Bennett made a surprise visit to Moscow a few days ago and offered to mediate between Russia and Ukraine on the ongoing Russian war against the latter.

The world’s eyes are on Israel now to see whether the country and its leader would be able to get the two sides, as well as the US and the Western nations both of whom are rallying behind Ukraine, to agree to some kind of a deal, and end the war. Bennett’s mission may or may not be successful, but I don’t think that matters much – that is simply the nature of conflict mediation: In war and peace, mediators succeed only sometimes. But it’s the effort that matters, and should be praiseworthy.

India should have offered to mediate.

What Makes India an Ideal Mediator?

India, in my opinion, would have made an ideal mediator between the two sides. As the war was still breaking out, Ukraine’s ambassador to India, Igor Polikha made the following statement: “India is an influential global player. I am asking and pleading for Indian support. (PM) Modi is one of the most powerful and respected leaders of the world. India has a privileged partnership with Russia. I am hopeful that in case of the strong voice of Modi ji, (President) Putin should at least think over.” He added: “Your Prime Minister can address Mr Putin and our (Ukrainian) President. India has played a peacekeeping role (in the past). I am asking for the strong voice of India to stop the war.”

Ambassador Polikha has a point. India is perhaps one of the few counties with good relations with all countries involved: Be it Russia, Ukraine, the US and the Western counties. More so, someone has to undertake this responsibility given the inability of the UN to do anything about it. Put differently, New Delhi had a real opportunity to be a meditator. But would being a mediator have helped New Delhi’s interests?

Would it Benefit India?

I can think of a number of ways India could have benefited by being a mediator in the ongoing war. For one, it would have provided New Delhi with an opportunity to be at the centre stage of global diplomacy. Indian leaders, diplomacy and diplomats would have been the focus on the international community while India carried some much-needed mediation.

Secondly, from a tactical point of view, Indian mediation in the war would have taken the sting out of the current (subdued but apparent) criticism of the Indian position at the UN, i.e., India’s unwillingness to condemn Russian aggression against Ukraine. In any case, had New Delhi been mediating between the two parties, it could have maintained that a mediator had to be a neutral party thereby justifying its unwillingness to vote for or against the UNSC resolutions.

Third, what is abundantly clear is that a prolonged war between Russia and Ukraine with much of the international community (especially the US and the West) rallying behind Ukraine is not in India’s interest. The longer the war drags on, the less wiggle room New Delhi would have to balance its friends on both sides: Russia on the one hand and the US and the Western states on the other. There would be enormous pressure on New Delhi to choose a side.

If New Delhi chooses Russia, US/West would be unhappy, and vice versa. Either way, India’s ability to garner support for itself to push back Chinese aggression would be limited. Put differently, if New Delhi could mediate and help defuse the situation, it certainly helps its strategic interests.

What if India fails to build peace between the two sides? In such an eventuality, I would argue, India loses nothing. But no harm in making an effort.

Previous Columns: One Year of the India-Pakistan Ceasefire

Is there a Downside to Being the Mediator?

One of the arguments against Indian mediation is that New Delhi may end up making the situation worse off for itself by inviting undue pressure on itself from both sides to settle matters based on their own suggestions. While that is a credible criticism, dealing with such delicate and sensitive negotiations is the stuff of diplomacy, and our diplomats are equipped and experienced enough to undertake such delicate negotiations.

Another counter to the proposal is that India simply doesn’t have the capacity to undertake such a major task at the global stage. That we are not a country materially powerful enough to get Russia and the other side to agree to certain terms and conditions. Such criticisms don’t take into consideration the fact that several smaller states have been at the forefront of conflict mediation around the world.

A final, and perhaps the most substantive counterargument is that by attempting to mediate between Ukraine and Russia, India is indirectly inviting third party mediation in its own conflicts, of which there are many. To being with, India has in the past allowed third parties to mediate in its conflicts: UN mediated between India and Pakistan during 1948-49, Soviet Union did so in 1965, and USA (albeit informally) in 1999 during the Kargil war.

But more to the point, does potential Indian mediation in the Ukraine-Russia war invite third party mediation in Kashmir? I doubt it. Because if India were to mediate in the Ukraine-Russia war, it would be by invitation or put differently, it would not do so if one of the parties are against India doing so. And as for Kashmir, India is unlikely to invite any mediator. And if a third party attempts to mediate without an invitation, New Delhi is likely to dismiss such attempts.