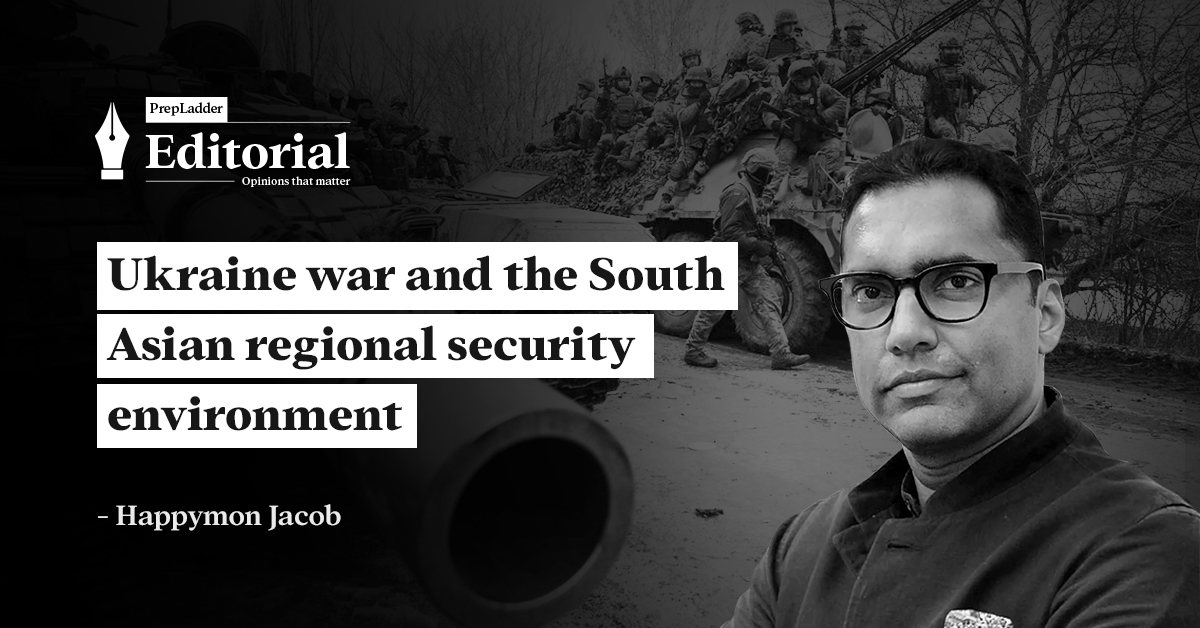 Proving wrong the assumptions that Putin’s Ukraine invasion will be a quick, sharp and decisive one, it is increasingly becoming evident that Russia’s war in Ukraine will not end anytime soon. Even if the war itself ends, there is uncertainty whether this will lead to a normalisation or reproachment between Russia and the US/Western powers. If so, the war in Europe will have serious implications for Southern Asia. Even though the implications of the Ukraine war for the South Asian region are still unfolding, we can already see some early signs of what they might look like going forward.

For one, China will use the time to consolidate its political and diplomatic grip on the region. On the positive side, however, one could make the argument the extraordinary resolve and unity shown by the West and the US against Russia in Ukraine will make Beijing rethink some of its assumptions about its own strategic/war plans in the region, especially towards Taiwan and the South China Sea.

On the other hand, however, China is not Russia – the latter’s economic and military power is no match for the former nor is the West’s reliance on the Chinese economy insignificant. So the ability of the US/West to push back Beijing’s aggression may be limited in comparison to their ability to push back Russian aggression. Be that as it may, what we are witnessing in the wake of Russia’s aggression against Ukraine is a political-diplomatic overdrive from Beijing towards the South Asian region.

On the one hand, China has been carefully calibrating its position toward Russia and consolidating its diplomatic position in the region, on the other hand. China’s support for Russia is far from complete – it refused to vote against the UNSC resolutions that sought to condemn Russian aggression. There is still no solid evidence to show that China has provided any military help or military hardware to Russia despite Russia’s request for the same.

China has utilised the time for reaching out to the region. Chinese foreign minister Wang Yi was on a visit to the South Asian region last week. First to Islamabad and then to Kabul. What is worth noting is that the rest of the international community has virtually stopped interacting with the Taliban government in Afghanistan (there are some 10 odd foreign missions active in Kabul but none of them belongs to the Western world). China is using the current great power vacuum in Afghanistan to reach out to the Taliban and ensure that its interests in the country are taken care of.

Wang Yi also visited India and held conversations with foreign minister S Jaishankar and National Security advisor Ajeet Doval. China, according to reports, would like to continue to engage India in various multilateral forums such as the BRICS. But the message from New Delhi may have disappointed Wag Yi. I personally think that Wang Yi’s visit was Beijing testing Indian waters to see if bilateral ties can be back to ‘business as usual’ despite the 2020 aggression & capture of territory by PLA. From what minister Jaishankar told the media soon after Yi’s departure, it doesn’t appear that New Delhi is keen to do that. How can it be business as usual between India and China when China is illegal occupation of Indian territory on the Line of Actual Control?

In the meantime, India’s neutrality with a pro-Russia tilt has not gone down very well with the West and the US. There is mounting pressure on New Delhi to give up the pro-Moscow tilt. One often hears words of disapproval from the Western missions based in New Delhi as well as from the White Houser media briefings.

So far, India has played its cards well. We recently saw the visit of the Japanese Prime Minister to New Delhi, and the Australian High Commissioner to New Delhi even went to the extent of saying that the Quad members do understand India’s position on Russia. India has also not been completely pro-Russia either. For instance, the recent joint statement between India and  Japan clearly says that it is important to respect international law and territorial sovereignty, among others. This is in line with the Indian explanation of the vote at the UNSC.

As for India, as I have previously written in this blog, the more the Ukraine war lasts the more India will be difficult to manage the great power contradictions.  Put bluntly, India today is caught between Russia and the US/west, and its ability to manoeuvre is sharply decreasing as time passes.

The other major implication for the region is that given their immediate focus on the Ukraine situation, the rest of the international community will take their attention away from the various South Asian conflicts such as the pro-democracy struggle in Myanmar, and the situation in Afghanistan.

Watch highlights of Episode 7 of the Legends of LBSNAA series featuring Ex-IAS officer Pradeep Kumar Misra. You can watch the full episode on the PrepLadder app.

For India, located where it is, what happens in the region is of great significance to its national security. While there is little urgency in the situation in Myanmar, the situation in Afghanistan is different. A lack of focus on Afghanistan means several things: one, it will give a free pass to Pakistan, China and to some extent Russia and Iran to play their cards there, cutting India completely out of the equation; second, without external assistance and access to Afghanistan’s money in foreign banks, the ability of the Taliban government to rule to country even half-decently will be very difficult. The less it is able to rule the country, the more Afghanistan will become a host to foreign terror outfits. While this will have an immediate spillover on Pakistan, it will also have implications for India’s interests in Afghanistan and in the region in the longer run.

It doesn’t seem that the Ukraine war will end anytime soon given the many interests and parties involved in the conflict, and the military pushback by the Ukrainians. The more it lasts, the more implications it will have for the region, including for New Delhi.

Why India Should Have Mediated Between Ukraine and Russia