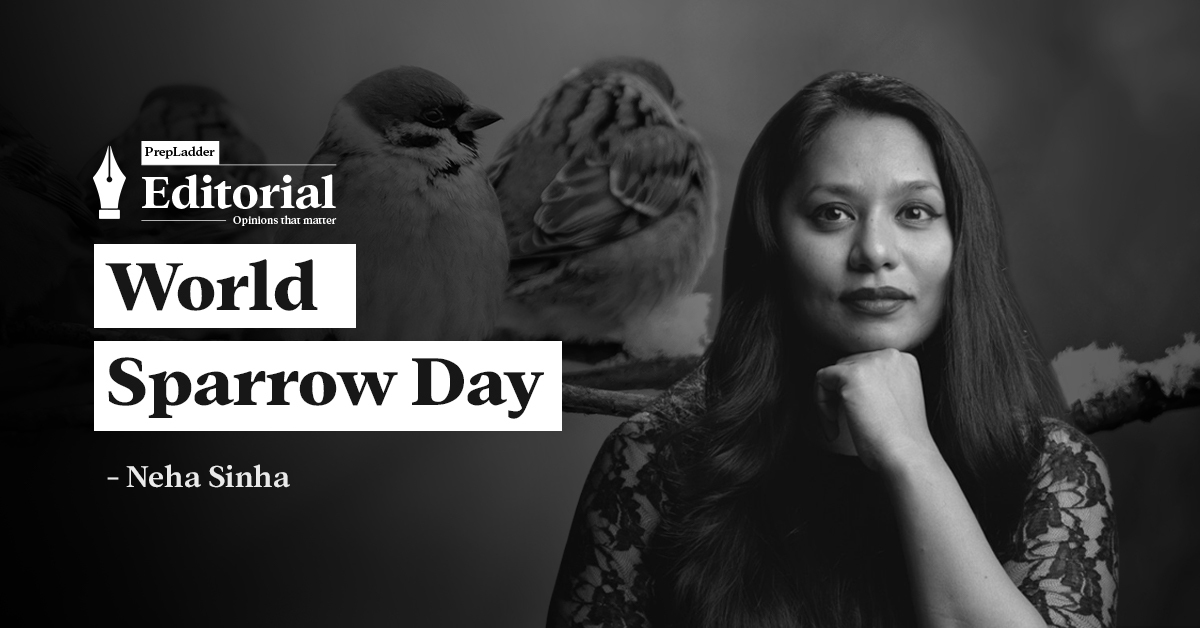 Most people associate ‘bird’ with the ‘goraiyya,’ the House sparrow.

The house sparrow is a small songbird that lives near people, and that is why for some of us, the House sparrow may be the first bird we have seen in our lives. This brown-and-black, the grain-eating bird has a charming, ‘cheep cheep’ call, and will readily make its nest in the homes of people, raising chicks at the same site year after year – such as in a hole in the wall, the cup of a fan, or behind a painting. But despite the fact that people and houses are very much around, house sparrows have been declining worldwide.

In the UK, the Royal Society for Protection of Birds reports a 71 per cent decline of house sparrows between 1977-2008, in both rural and urban places. A survey by the Indian Council of Agricultural Research (ICAR) found that the house Sparrow population has declined in many places- it has reduced about 88% in Andhra Pradesh Kerala, Gujarat, Rajasthan it has dropped up to 20%. Visibly, the house sparrow seems to have reduced in cities.

Now, 20 March is celebrated each year as World Sparrow day – this is in order to bring attention to the bird, raise awareness, and work towards its conservation.

How is the House Sparrow Doing Now?

The good news is that though the House Sparrow has shown declines, with some interventions the populations seem to be rebounding.

In 2020, the first State of India’s birds report was released. This report is the first comprehensive look at how India’s birds are doing. There are over 1300 birds in India, and the report evaluated how both common and endangered Indian birds are doing. For this, it used a new tool: citizen science. 867 Indian birds were covered, by analysing 10 million observations uploaded by over 15,500 citizen scientists. Some of the records were current, and some were older, because birdwatchers were requested to share older bird lists.

The purpose was to understand how birds are doing currently and historically, in order to understand if they had declined, stayed at similar population thresholds, or increased. As per the findings of the report, 101 birds were listed as being of high conservation concern. Some of the birds that were considered common have had population declines. These include Cotton Teal, Short-toed Snake Eagle, Yellow-fronted Pied Woodpecker, the Indian Thick-knee, and Common Woodshrike.

But it was also found that House sparrows are not doing too badly. The bird seems to be declining in metropolitan areas- with new buildings not providing traditional nesting areas, and an excess of pesticides killing insects that sparrow fledglings eat. But at the same time, in less built-up areas, sparrow populations appear stable. In areas within cities too, sparrows are returning wherever they are given chemical-free areas and nesting boxes.

How Can we Bring House Sparrows Back?

The decline of house sparrows points to the following things.

The Following Are Lessons in Bringing Back House Sparrows.

Firstly, using less chemicals in our life is generally a good way to reduce toxins in ecosystems. As insects come back to gardens, sparrows come back. Secondly, simple nests made out of shoe-boxes, waste material, pots, and wood are being used by sparrows in many cities. Thirdly, in our largely hot country, traditional architecture with locally sourced material should be used – not only does this reduce carbon footprints, but it will also bring nesting birds back. Finally, the case of the House Sparrow also reveals how important it is to study wildlife at a national level because this is an indicator of how the environment is doing.

Thankfully, it’s not too late for the goraiyya.

Previous Columns: Bird Flu and The Challenge it Poses in a Warming World