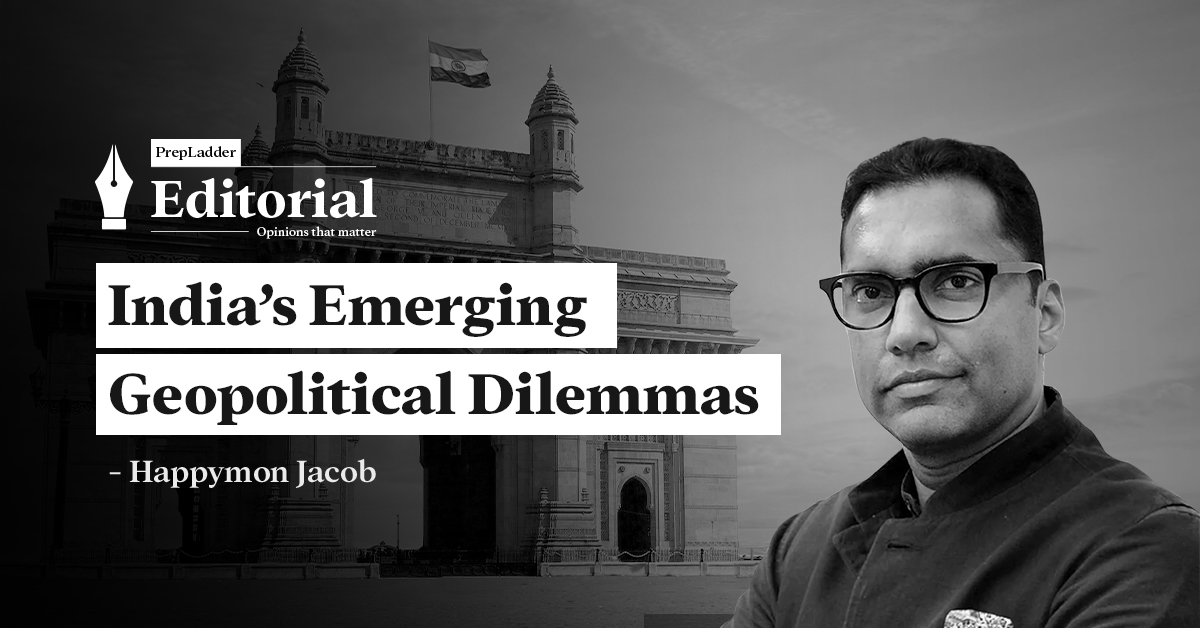 Contemporary Indian foreign and strategic policy is faced with a number of serious geopolitical dilemmas. Thanks to the Ukraine war and several other geopolitical developments in the immediate region and beyond, New Delhi is in the middle of a geopolitical whirlwind. The choices that our policymakers make and how today they get implemented over the coming months and years will have defining implications for the country’s national security and strategic interests.

The most significant dilemma that the country faces today is how far to go in support of Putin’s misadventure in Ukraine. There are pros and cons to India’s subtle support to Russia. There is little double in my mind that India’s (subtle) pro-Moscow position has been a result of its geopolitical vulnerability of being in the midst of a hostile region. And yet, the pressure is starting to build on India. So we must start asking the question of how far we should go with Russia. Are we sacrificing some of our other national interests in standing by Russia in a war we have nothing to do with? If this war becomes a prolonged one, which it is looking like, New Delhi’s ability to steadfastly stand with Moscow and Putin will drastically reduce. India has a number of geopolitical interests most of which Russia cannot help India with. So the decision-makers in New Delhi must start putting together alternative plans.

The second big dilemma to my mind is how to balance China. China is a neighbour, an emerging superpower, a challenge, an economic partner, and a country with which India has several convergences in areas such as climate change, trade etc. What stands out of course is the fact that China is the most serious national security challenge to India today. Unlike Pakistan, it is neither easy to push back the Chinese nor is it possible to ignore them. The only option that New Delhi has is to do smart-balance the Chinese: Work with Beijing and push back any aggression from China unreservedly. But it is easier said than done. The contours of such a ‘smart-balancing’ policy need to be properly worked out.

The third major geopolitical dilemma that India faces today is about balancing its maritime strategies with its continental ones. India is geopolitically vulnerable in the continental domain but is relatively strong in the maritime domain thanks primarily to its powerful partners such as the US, France, and Japan, among others. The dilemma that New Delhi faces, to put it in a simplistic manner, is that what it does in one domain will have implications in the other domain. If New Delhi, for instance, increases its maritime engagement via Indo-Pacific and the Quad, this will prompt China to be aggressive in the continental domain. If India is preoccupied with the continental domain, it would be hard-pressed to act effectively in the maritime domain. But perhaps more importantly, there is a need to think carefully about the school of thought that argues that smart maritime strategies can help India ease the Chinese continental pressure on the country. This is a tempting argument, but one has to be extremely careful in trying to put this into practice. In any case, the decision-makers in New Delhi will need to carefully consider how to balance the country’s maritime and continental strategies.

The fourth emerging dilemma is about living with a number of strategic contradictions. First is the normative dilemma. India is a democratic country and it normatively identifies with the political West, but it is geographically studied in the middle of a chaotic, hostile non-Western landmass. So while India is expected to stand by the West’s normative positions, it is often unable to do so. That is why the western exhortations of democracy Vs non-democracies routinely fall on deaf ears in India. Secondly, India needs both the US-led western countries as well as Russia to meet its national security and strategic objectives. Given the increasing contradiction between them, it has become hard for India to balance these contradictions. In other words, one of the hardest challenges India faces today is the difficult task of balancing such contradictions.

Finally, outsiders view India as a major power in the region and often call upon New Delhi to contribute to stabilising the region. But we have seen a New Delhi that is deeply reluctant to get involved in anything in the region or beyond. This is often deeply surprising to those outsiders urging India to take a more proactive position. But I believe what explains the Indian unwillingness is the mismatch between domestic capability and international expectations. India is a developing country with a large number of its people poor, impoverished and unemployed. Its focus, therefore, is domestic and economic development. More so, taking sides and flexing its muscles can also be costly - economically, militarily and diplomatically. And New Delhi appears unwilling to pay those costs.

Let me put that somewhat bluntly. Thanks to the Ukraine war and several other geopolitical developments in the immediate region and beyond, New Delhi is in the middle of a gathering geopolitical storm. ​And yet, there is an abiding unwillingness to ​step up and shape the outcomes of those developments. ​​Toi my mind, this is a product of India’s deep sense of internal vulnerability. Can a weak state engage in proactive external action?