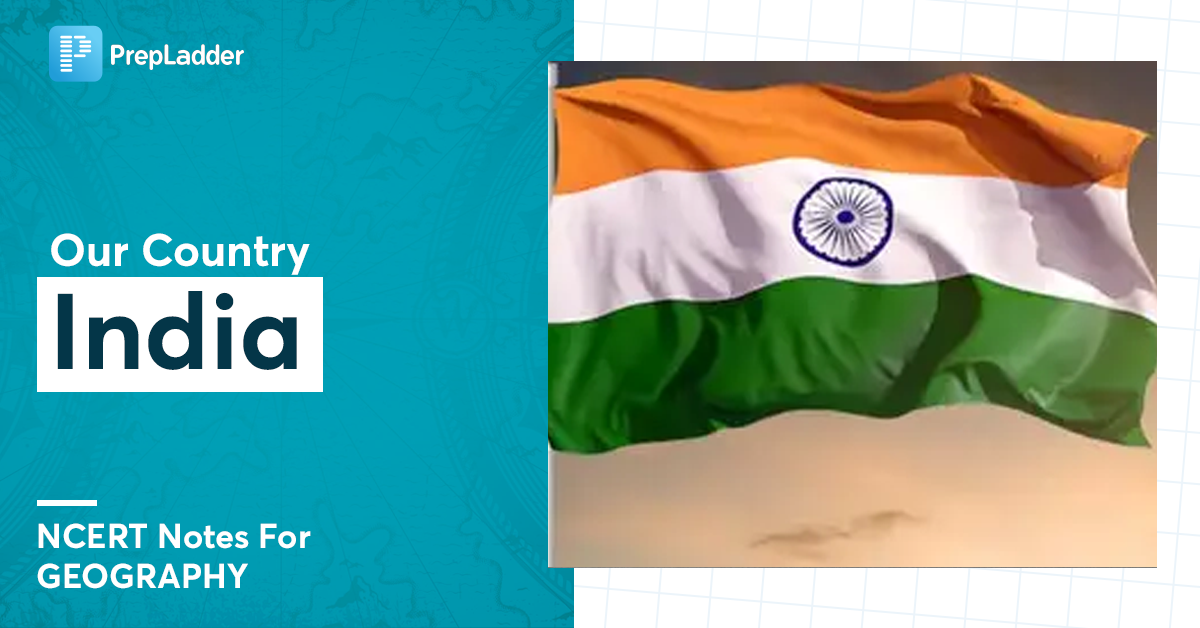 India is a country of vast geographical expanse. In the North, it is bound by the lofty Himalayas. The Arabian Sea in the West, the Bay of Bengal in the East and the Indian Ocean in the South, wash the shores of the Indian peninsula. Understand India in depth and upgrade your UPSC CSE preparation with this article 'Our country India'.

Corals are skeletons of tiny marine animals called Polyps. When the living polyps die, their skeletons are left. Other polyps grow on top of the hard skeleton which grows higher and higher, thus forming the coral islands.

How did India get its name?

The name "India" is derived from the River Indus, which is also the origin of the name "Hindustan." The ancient Persians, who invaded this region in the 6th century BCE, referred to this land as "Hindu" and the people as "Hindus," which is where the terms "Hindustan" and "Hindu" originate. The name "India" was later used by the British to refer to the entire subcontinent, including present-day India, Pakistan, and Bangladesh.

The major physical divisions of India are:

India shares its land boundaries with seven countries. Name them.

Which two major rivers fall into the Arabian Sea?

The two major rivers that fall into the Arabian Sea are the Narmada and the Tapti.

Name the delta formed by the Ganga and the Brahmaputra.

The delta formed by the Ganga and the Brahmaputra is the Sundarbans Delta. It is located in the West Bengal state of India and Bangladesh and is one of the largest deltas in the world. It is known for its vast mangrove forests, rich biodiversity and diverse ecosystems, and is a UNESCO World Heritage Site.

How many States and Union Territories are there in India? Which states have a common capital?

As of 2021, there are 28 states and 9 union territories in India.
Himachal Pradesh and Punjab have a common capital of Chandigarh.

Why do a large number of people live in the Northern Plains?

The Northern Plains region of India, comprising the states of Punjab, Haryana, Uttar Pradesh, Bihar, and West Bengal, is one of the most densely populated regions in the country due to several factors.

Firstly, the region has a fertile soil and favorable climate for agriculture, making it an ideal location for farming and cultivation. The fertile soil is a result of the alluvial deposit brought by the rivers flowing through the region. The monsoon rains also provide adequate water for irrigation. This has led to the development of extensive agricultural practices and the cultivation of a variety of crops, making it an attractive location for farmers to settle and make a living.

Secondly, the Northern Plains also have a rich history of trade and commerce, with several major cities such as Delhi, Kolkata, and Patna, which have been important centers of trade and commerce for centuries. This has led to the development of various industries and job opportunities, attracting people to settle in these cities.

Lastly, the Northern Plains also have a good transportation infrastructure, with several major highways and rail networks connecting the region to other parts of the country. This has made it easier for people to move to the region for work and business opportunities, further increasing the population.

In summary, the Northern Plains' fertility of soil, favorable climate for agriculture, rich history of trade and commerce, and good transportation infrastructure, have made it an attractive location for people to settle and make a living.

Why is Lakshadweep known as a coral island?

If you are targeting UPSC CSE 2023, download the PrepLadder app and transform your UPSC CSE preparation from the Beginner level to the Advanced level. You can also join our Telegram channel to stay updated with the latest information about the exam.