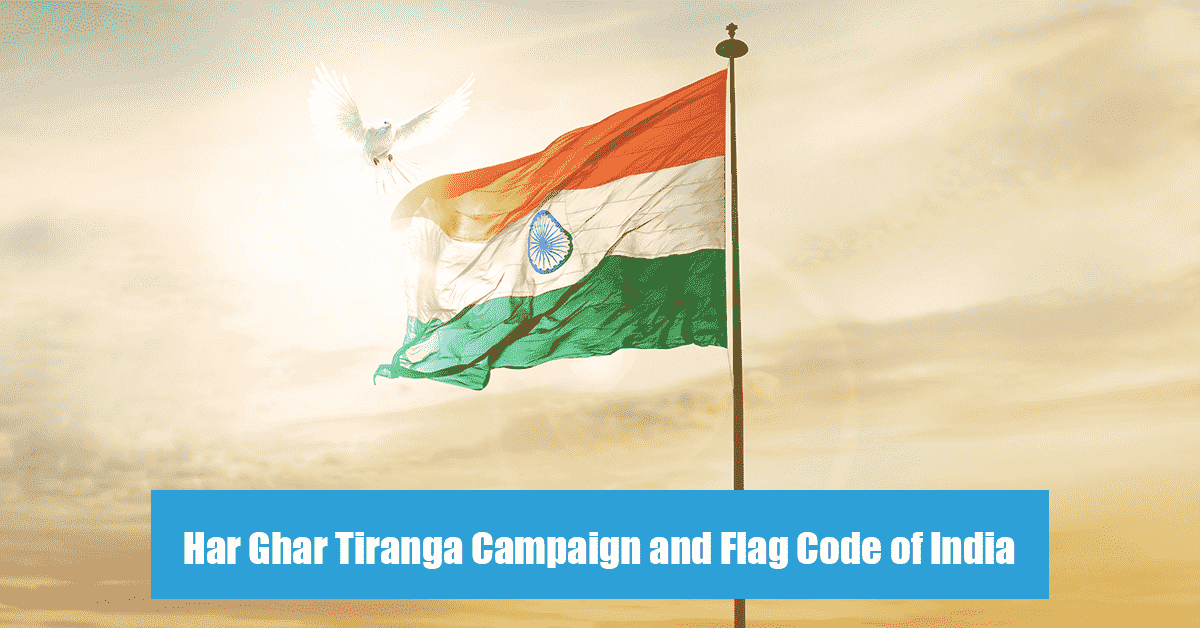 It’s time to elevate your UPSC CSE preparation with our daily dose of Current Affairs. Today’s edition will comprise the Har Ghar Tiranga Campaign and Flag code of India in the context of the upcoming 75th Independence day celebrations.

Keep on reading to upgrade your UPSC preparation as we discuss the topic in detail and also talk about the Flag Code of India, 2002.

As part of the celebrations of India’s 75th year of Independence, the Government of India has launched “Har Ghar Tiranga” Campaign. While participating in the campaign it is important to understand Flag Code of India.

● ‘Har Ghar Tiranga’ is a campaign under the aegis of Azadi Ka Amrit Mahotsav to encourage people to bring the Tiranga home and to hoist it to mark the 75th year of India’s independence.

● Through this campaign Citizens are encouraged to hoist the flag in their homes from 13th to 15thAugust 2022.

● The idea behind the initiative is to invoke the feeling of patriotism in the hearts of the people and to promote awareness about the Indian National Flag.

Also, read our yesterday’s edition of Current Affairs on What Indian Laws say about Abortions?

● The hoisting/use/display of the Indian National Flag is governed by the Prevention of Insults to National Honor Act, 1971 and the Flag Code of India, 2002.

Some of salient features of the Flag Code of India, 2002 are listed below for the information of the public:-

● The Flag Code of India, 2002 was amended vide Order dated 30st December, 2021. Now, the National Flag shall be made of hand spun and hand woven or machine made, cotton/polyester/wool/silk khadi bunting.

● A member of the public, a private organization or an educational institution may hoist/display the National Flag on all days and occasions, ceremonial or otherwise, consistent with the dignity and honor of the National Flag.

● The Flag Code of India, 2002 was amended vide Order dated 19th July, 2022. Now, when the Flag is displayed in the open or displayed on the house of a member of the public, it may be flown day and night.

● The National Flag shall be rectangular in shape. The Flag can be of any size but the ratio of the length to the height (width) of the Flag shall be 3:2.

● Whenever the National Flag is displayed, it should occupy the position of honor and should be distinctly placed.

● A damaged or disheveled Flag shall not be displayed.

● The Flag should not be flown from a single masthead simultaneously with any other flag or flags.

● The Flag should not be flown on any vehicle except of the dignitaries mentioned in Section IX of Part III of the Flag Code, such as President, Vice-President, Prime-Minister, Governors etc.

● No other flag or bunting should be placed higher than or above or side by side with the National Flag.

If you are appearing for UPSC CSE 2023 exam, then this video by Sharad Tripathi Sir, (Science and Technology faculty) on a one-year preparation plan will help you excel in your IAS 2023 preparation: