Siachen Demilitarisation Is Desirable But Difficult 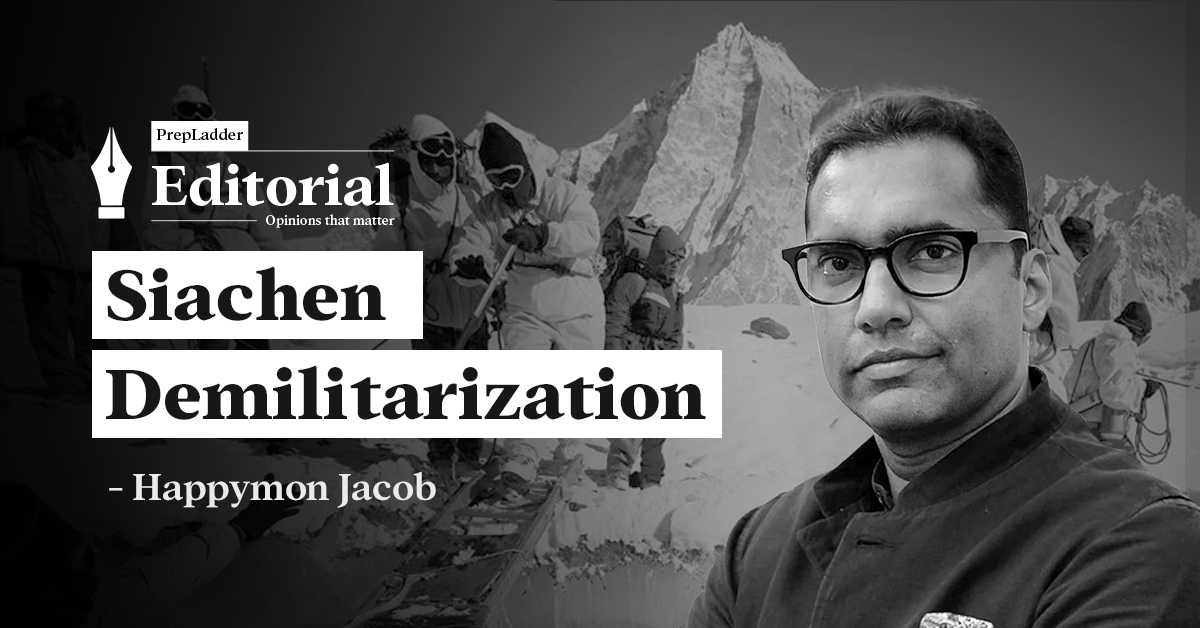 Indian Army chief General Manoj Mukund Naravane's statement at his customary press briefing ahead of Army Day on January 15 had an interesting bit on the Siachen dispute between India and Pakistan. His comment has led to a lot of commentary in India and Pakistan on the feasibility and desirability of demilitarising the Siachen glacier.

Gen Naravane said, "We are not averse to the demilitarisation of the glacier, but the pre-condition for that is to accept AGPL. Pakistan has to accept what are their positions and what are ours, and both of us have to sign on the dotted line before any kind of disengagement takes place".

Put differently, contrary to popular belief; the army chief argued that India is still open to a peaceful settlement of the Siachen dispute between the two sides provided Pakistan agrees to certain conditions. A close reading of the Indian and Pakistani positions on the Siachen conflict would show that if there is a willingness in New Delhi to resolve the Siachen standoff, it would not be very hard to do so. But the real challenge to such a resolution may come from the ongoing India-China standoff on the LAC than the complexities of India-Pakistan relations.

A Brief History Of The Dispute

Let's briefly review the origins of the Siachen dispute. The Siachen dispute is a result of the ambiguity that exists in the Karachi ceasefire agreement of July 1949. The agreement, which established the ceasefire line, the actual positions of the Indian and Pakistani militaries at the end of the 1947-1948 war, did not delineate beyond grid reference NJ 9842, which falls south of the Siachen glacier, to the Chinese border but left it as "thence North to the glaciers." In 1949 it was perhaps the most practical thing to do given that the entire area was not inhabited and extremely difficult to demarcate.

The dispute arose because the Indian and Pakistani sides have interpreted the phrase in the Karachi agreement "thence North to the glaciers" very differently. Pakistan's stated position is that the phrase means that the line should go from NJ 9842 straight to the Karakoram pass on the Sino-Indian border. India, on the other hand, argues that the line should proceed north (as the phrase in the agreement says) from NJ 9842 along the Saltoro range to the border with China.

Differing interpretations apart, both sides have realized the extreme hardship faced by their respective troops in the Siachen area and have often considered mutual demilitarisation as a means to resolve the conflict.

Past Efforts At Conflict Resolution

During past demilitarisation talks, New Delhi had insisted that the present ground positions on the Saltoro ridge should be demarcated and authenticated on a map before any demilitarisation could be conducted, fearing that once India withdraws from the region, the Pakistan Army could occupy the high ground, something the latter was weeks close to doing when the Indian occupation took place in 1984. Moreover, New Delhi does not want any future disagreement on the posts and locations to be vacated by the Indian side. India has, therefore, insisted that joint demarcation of the Actual Ground Position Line (AGPL) on the ground, as well as the map, should be the first step to be followed by a joint verification agreement and redeployment of forces to mutually agreed positions.

The Geopolitics Of The Iran Nuclear Deal 2.0

Pakistan has traditionally objected to this Indian position, arguing that: 1) India is the occupying party in Siachen and it should unconditionally withdraw, and the pre-1984 status quo should be maintained; 2) by agreeing to a joint demarcation, Pakistan would be accepting the Indian claims in Siachen, at least theoretically; and 3) if Pakistan accepts such demarcation, it will amount to endorsing the Indian occupation of 1984. Pakistan has therefore proposed that demilitarisation of the region, withdrawal of forces, and authentication proceed simultaneously. Islamabad also reasons that by occupying Siachen in 1984, India is in breach of the Simla Agreement, which stated that "the line of control resulting from the ceasefire of December 17, 1971, shall be respected by both sides… (and) neither side shall seek to alter it unilaterally".

In 1992, Pakistan had agreed to record the existing troop positions of the respective armies in an annexure to the demilitarisation agreement. But the agreement was eventually not signed.

In 2006, the two sides agreed to have a phased withdrawal and joint monitoring of the demilitarised zone. Had the deal gone through, the two sides would have added an annexure to the main agreement, which would identify the current locations of the two forces deployed as well as the locations to which they would withdraw. According to the former foreign secretary, Shyam Saran, who was the key Indian negotiator at the point, "the agreement and the annex would have the same legal validity, and this would be explicitly declared in the agreement itself. The proposed agreement ran into opposition as had the 1992 version, and the initiative was then dropped."

Since 2006 there has been little momentum on the issue until Gen. Naravane brought up the topic earlier this month. So is the army chief's proposal a workable one? If someone were to ask me a few years ago about the likelihood of an India-Pakistan agreement to demilitarise Siachen, I would have been positive. But I have serious doubts about the likelihood of such an agreement after the India-China military standoff on the Line of Actual Control (LAC) in the summer of 2020.

So how does the ongoing India-China military standoff impact the India-Pakistan dispute over Siachen? Here's how. Chinese presence in the Karakoram range is less than 90 kilometers from the Siachen area. More specifically, the distance between Depsang, which witnessed a military standoff between India and China in 2013 and a potential flashpoint, and Siachen, where the Indian forces are deployed, is around 90 kilometers. So even though such terrains are not easily navigable by any military, one doesn't know what the future holds in such contexts.

Therefore, while the Army chief's recent statement on demilitarising Siachen is in line with India's past negotiating positions on the issue, the 2020 Chinese aggression on the LAC & PLA's continued military build-up in the region may have altered New Delhi's Siachen calculations. In that sense, Siachen is another missed opportunity for peacebuilding between India and Pakistan.