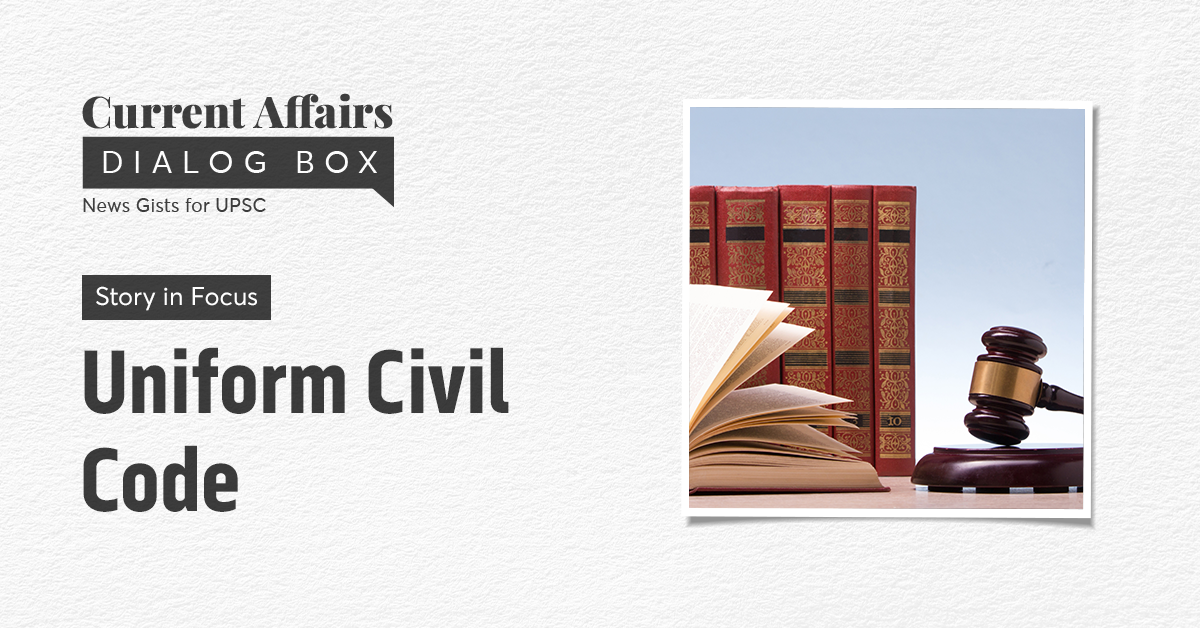 Uniform Civil Code has always been in the news for some or other reasons, and it makes for a possible question in the Civil Services exams. To enhance your UPSC exam preparation, we will discuss the Uniform Civil Code in detail in this article.

In the context of Indian Polity, there has been a demand for the implementation of the Uniform Civil Code from time and again.

Discuss the possible factors that inhibit India from enacting for its citizens a uniform civil code as enshrined in the Directive Principles of State Policy.

• Article 44 of the Indian Constitution lays down that the State shall endeavour to secure a Uniform Civil Code (UCC) for the citizens throughout the territory of India.

• It calls for the formulation of one law for India, which would be applicable to all religious communities in matters such as marriage, divorce, inheritance, adoption. Currently, different laws regulate these aspects for adherents of different religions and a UCC is meant to do away with these inconsistent personal laws.

• The same civil law will then be applicable to all citizens irrespective of their faith.

• The Constitution's framers used the term “uniform" in Article 44 and not "common", because  "common" means "one and the same in all circumstances", while "uniform" means "the same in similar conditions”.

• The origin of the UCC dates back to colonial India when the British government submitted its report in 1835 stressing the need for uniformity in the codification of Indian law.

• An increase in legislation dealing with personal issues in the far end of British rule forced the government to form the BN Rau Committee to codify Hindu law in 1941.

• The 1937 Act was reviewed, and the committee recommended a civil code of marriage and succession for Hindus.

In Sync with Changing times: There has been a steep rise in inter-community, inter-caste and interfaith marriages and relationships, which has exploded especially in the last few decades thereby the implementation of UCC will be in conformity with the changing times.

Boosting National Integration: Uniform Civil Code in India would help the cause of national integration by removing ideological contradictions due to religious affiliations.

In line with the Constitutional Values: Our Preamble has envisaged a secular polity, which essentially needs a common law for all citizens irrespective of their religious beliefs.

Also, watch a detailed video on Article 44 and Uniform Civil Code by M.Puri Sir, our DREAM TEAM faculty for Polity, IR, and Governance:

• Communal Politics: The demand for a uniform civil code has been framed in the context of communal politics.

o A large section of society sees it as majoritarianism under the garb of social reform.

Constitutional Hurdle: Article 25 of the Indian constitution, which seeks to preserve the freedom to practise and propagate any religion gets into conflict with the concepts of equality enshrined under Article 14 of the Indian Constitution.

Also read: How to Prepare Indian Polity for UPSC Prelims?

The need for a Uniform Civil Code flows from the very concept of secularism, which mandates the complete separation of religion and State. It needs no reiteration that laws have to be equal for all citizens, irrespective of religion, caste or gender. The goal of a UCC should ideally be reached in a piecemeal manner, like the recent amendment on the age of marriage rather than adopting a hasty approach.

What are Personal Laws?

• Laws that apply to a certain group of people based on their religion, caste, faith, and belief made after due consideration of customs and religious texts.

• The Personal laws of Hindus and Muslims find their source and authority in their religious ancient texts.

• Under the Constitution, the power to legislate in respect of personal laws rests with both the Parliament and state Assemblies.

• Preservation of legal diversity seems to be the reason for the inclusion of personal law in the Concurrent List (entry No.5).

While the criminal laws in India are uniform and applicable equally to all, no matter what their religious beliefs are, the civil laws are influenced by faith. Swayed by religious texts, the personal laws which come into effect in civil cases have always been implemented according to constitutional norms.

For more informative articles like this, download the PrepLadder app and get access to well-structured and the most comprehensive study material for Civil Services exam preparation. You can also join our Telegram channel for UPSC exam preparation to apprise yourself with the latest information about the exam