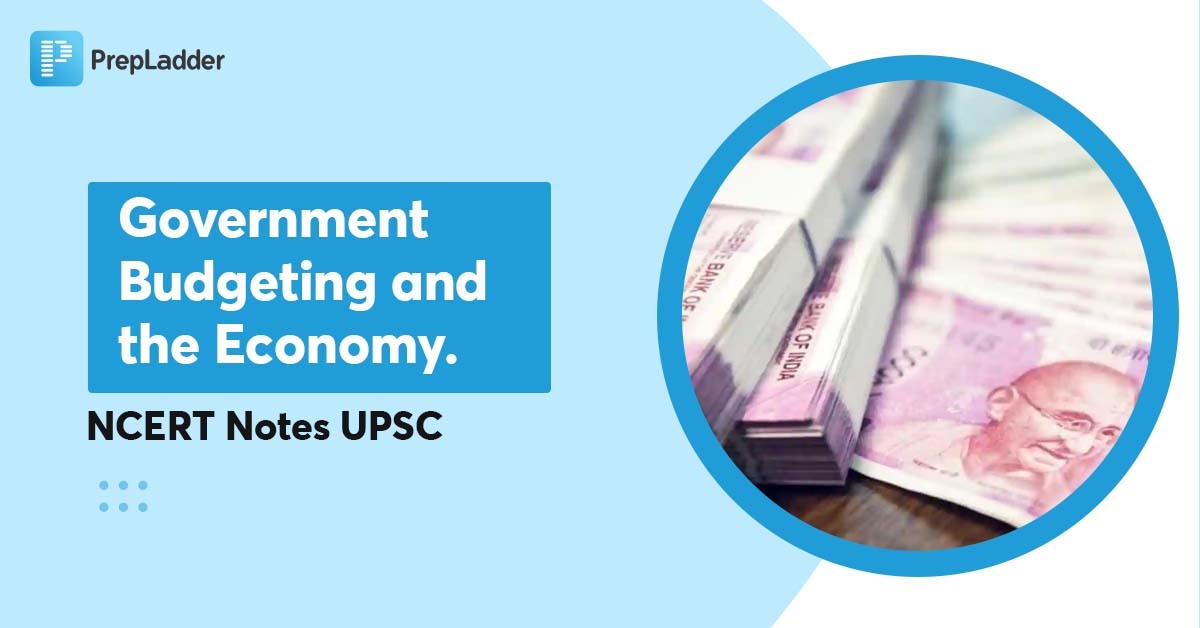 The government prepares the budget every year for fulfilling certain national objectives such as allocation of scarce resources, distribution of income, reducing regional disparity, etc.

In a Mixed Economy where both the public as well as private sector exists, the government can influence the economy in many ways, one such way is the government budget. Navigate through the blog to enhance your UPSC Preparation and give an extra edge to your preparation.

But before we move on to the details, here are the details about the IAS Scholarship Test 2022 that you must know about.

Register for PrepLadder’s IAS Scholarship Test where the top 100 scorers of each test will get the chance to win a LIVE mentorship session with the Dream Team.

All those receipts of the government which create liability or reduce financial assets are termed as capital receipts.

The amount of deficit (When the spending is more than the revenue earned), can be captured in different ways, each having their own implications for the economy.

Implications of Revenue Deficit on the Economy

The goal of measuring primary deficit is to focus on present fiscal imbalances.

Budgetary deficits can be financed by either taxation, borrowing or printing money. To finance such deficit the governments have mostly relied on borrowing, known as government debt.

However, if the government continues to borrow year after year, the outstanding debt accumulates causing greater interest liability, which itself can become another reason for further borrowings.

Perspectives on the Handling of Government Debt

The debt of the government can be financed by raising money through taxation or printing new currency.

Other Perspectives on Deficits and Debt

However, the above perspectives hold true under the circumstances, where the government deficit and resultant debt would not be able to augment the incomes in the economy. If due to deficit budgets, incomes see a steady rise the negative externalities can be off set.

Similarly, investment in better infrastructural facilities today may prove to be very beneficial for the future generations.

Hence, debt should not be considered burdensome at the face of it, however judged in accordance with the overall growth of the economy.

Government deficit can be reduced by an increase in taxes or reduction in expenditure.

It is the policy by which the government adjusts its expenditure (spending) and tax rates to increase output and income and seeks to stabilise the ups and downs in the economy.

The change in Government Spending and Taxation policies impact the functioning of the economy in the following ways:

Under proportional income tax government collects a constant fraction, of income in the form of taxes. This kind of taxation acts as an automatic stabiliser because:

The enactment of the FRBMA, in August 2003, marked a turning point in fiscal reforms, binding the government through an institutional framework to pursue a prudent fiscal policy.

Main Features of the Act

It mandates the Central Government to:

The act applies to the central government. However, most states have already enacted fiscal responsibility legislations which have made the rule based fiscal reform programme of the government more broad based.

However, this act is for fiscal prudence there are fears that it may lead to reduction in welfare expenditure.

Since, the enactment of the FRBMA Indian economy has moved to the states of a middle income country and much has changed both domestically and globally, while affirming faith in the fiscal principles set out in the FRBM but to incorporate the changing scenario in the country for better future growth, the FRBM Review Committee had been constituted.

It is a single comprehensive indirect tax, operational from 1 July 2017. GST is levied on the supply of goods and services, right from the manufacturer/ service provider to the consumer.

The 101st Constitution Amendment Act was enacted to facilitate the GST. The amendment introduced Article 246A in the Constitution cross empowering Parliament and Legislatures of States to make laws with reference to Goods and Service Tax imposed by the Union and the States.  Thereafter CGST Act, UTGST Act and SGST Acts were enacted for GST.

Main Features of the Act