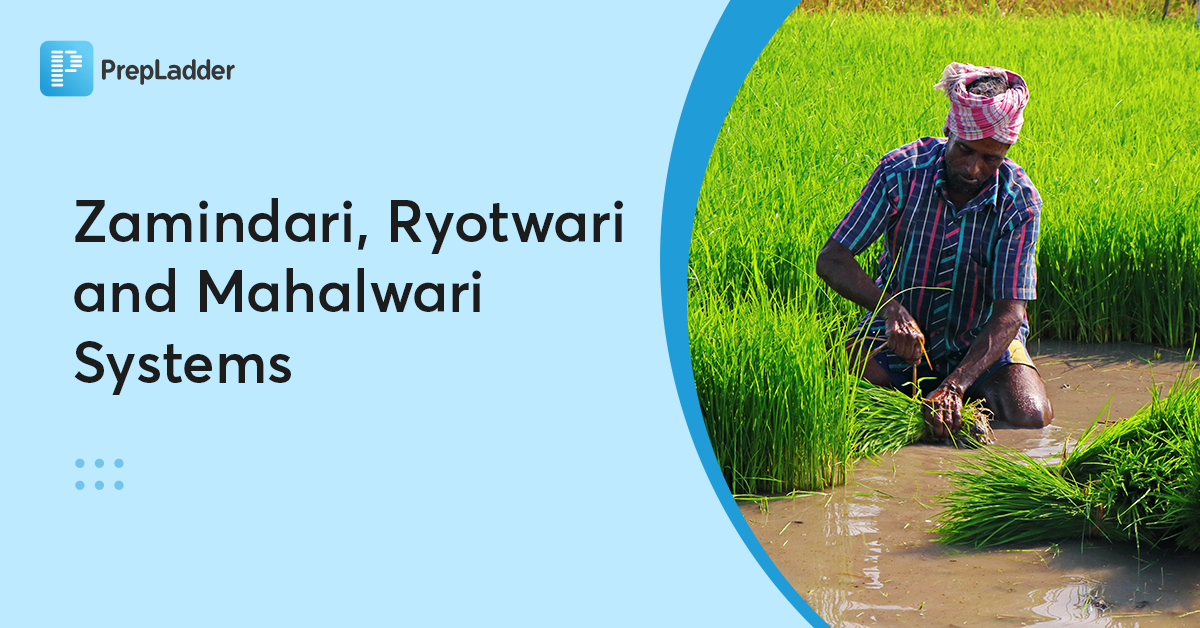 Before we dive into this blog, you should know why ‘land revenue systems in British India: Zamindari, Ryotwari and Mahalwari’ is a recurring topic for UPSC CSE aspirants.

These systems are essential to know because land revenue systems were a significant source of income for the British government in India. These systems help us understand the power dynamics of the era and how it led to the much-highlighted land reforms post-Independence.

Now, let us go deeper into the topic and understand the major land revenue systems in British India - Zamindari, Ryotwari and Mahalwari. These are important to know for your UPSC Prelims and Mains preparation.

Land ownership has always been a massive point of contention for those in power. Land ownership pattern has witnessed a lot of changes over centuries. The tax levied from the land was a significant source of income for rulers and emperors in ancient and medieval times.

Here was the hierarchy prevalent during those times. The King was the owner of all land. Beneath him, the land was divided into Jagirs, and each Jagir was allocated to Jagirdars who managed these lands.

These Jagirdars split the land they got into multiple sub-parts, and each sub-part was given to a Zamindar. These Zamindars were the lowest line of owners in the hierarchy. They gave the land to the peasants to cultivate the land, and in return, they collected part of the revenue generated as tax.

Before you move on to the next section, here is a video that you must watch and will be able to relate to. Humans of UPSC is PrepLadder’s latest series, where we go to the streets of Rajendra Nagar and interview UPSC aspirants. Watching ‘Humans of UPSC’ gives insight into how the situation is for most aspirants on the ground level. Click to play the video.

During the British reign, three major systems of land revenue collection existed in India. They were known as Zamindari, Ryotwari and Mahalwari.

Let us now look at each of these systems in detail.

The Zamindari System was also known as the Permanent Settlement System. This was because Zamindars were given hereditary rights of succession of the lands under them. They were free to sell or transfer the land as they wished. Their ownership and proprietary rights existed as long as they paid a fixed revenue to the government every month.

Lord Cornwallis introduced the Zamindari system in 1793 through the Permanent Settlement Act in the provinces of Bengal, Bihar, Orissa and Varanasi. Under this system, the Zamindars were given rights to the land and allowed to collect rent from the peasants, thereby becoming the owners of the land while the peasants became the tenants.

The rules about paying rent for farming on the land were very strict. Peasants had to pay their rent even if the yield was poor, and they had to pay it only in cash. This caused the peasants a huge problem. Before the system was introduced, peasants could pay the rent in kind.

From the total rent amount collected, a majority share would be taken by the East India Company (around 9/10), and the rest (1/10) would belong to the Zamindar who collected the rent.

That’s everything you need to know about the Zamindari System. Next, let us go through the Ryotwari System.

In the Ryotwari system, the rules were slightly different but not in any way that benefited the farmers who cultivated the land.

Thomas Munro introduced the Ryotwari system in 1820. It was the primary system for revenue collection in South India, including areas like Madras, Bombay, parts of Assam and Coorg provinces of India.

In this system, the ownership rights to the cultivated land remained with the peasants and the British government officers collected rent directly from the peasants.

However, this did not mean peasants enjoyed better financial status under Ryotwari. Although the ownership of land was with the farmers, excessive tax imposed on the land diminished their earning power to a great extent.

Moreover, the tax rates were frequently revised and increased, making the financial burden heavier on the poor peasants.

After Ryotwari, let's look at the Mahalwari system of land revenue.

Holt Mackenzie introduced the Mahalwari system in 1822, and William Bentick reformed the system in 1883.

Mahalwari consisted of provisions from both the Zamindari and the Ryotwari systems. It was the primary land revenue system in North-West India. It included the regions of Central Province, North-West Frontier, Agra, Punjab and the Gangetic Valley, among other regions of British India.

Under the Mahalwari system, the land was divided into ‘Mahals’, and each Mahal would consist of a few villages. Here, instead of individual villages, the entire Mahal was considered as a single unit for tax collection.

The village headman or the village committee took the responsibility of collecting all the taxes and handing them over to the British. The taxes levied in this system were equally high and imposing.

What Were The Problems Caused By The British Land Revenue Policies?

In case a farmer could not pay back the loan with interest, the moneylenders seized his agricultural land.

The Zamindari Abolition Act was passed by the states of UP, Tamil Nadu, Bihar and Madhya Pradesh, among others. The surplus land was confiscated from Zamindars, and the Land Ceiling Act was passed in different parts of the country.

Putting a ceiling on the amount of land and its redistribution was most successful in Kerala and West Bengal. In other states, only certain pockets in different states saw some success in land redistribution.

Topics like the Land Revenue Systems in British India are abundant in the UPSC CSE syllabus. PrepLadder’s high-quality video lectures make it easier to remember specific details about everything.

It also includes 200+ hours of PrepLadder Live, where you can clear all your doubts and boost your preparation with MCQ discussions.

You can access these once you enrol in the UPSC-GS Dream Pack.

Also, follow our Telegram channel for tips and guidance on acing the UPSC CSE along with regular updates about the IAS exam.