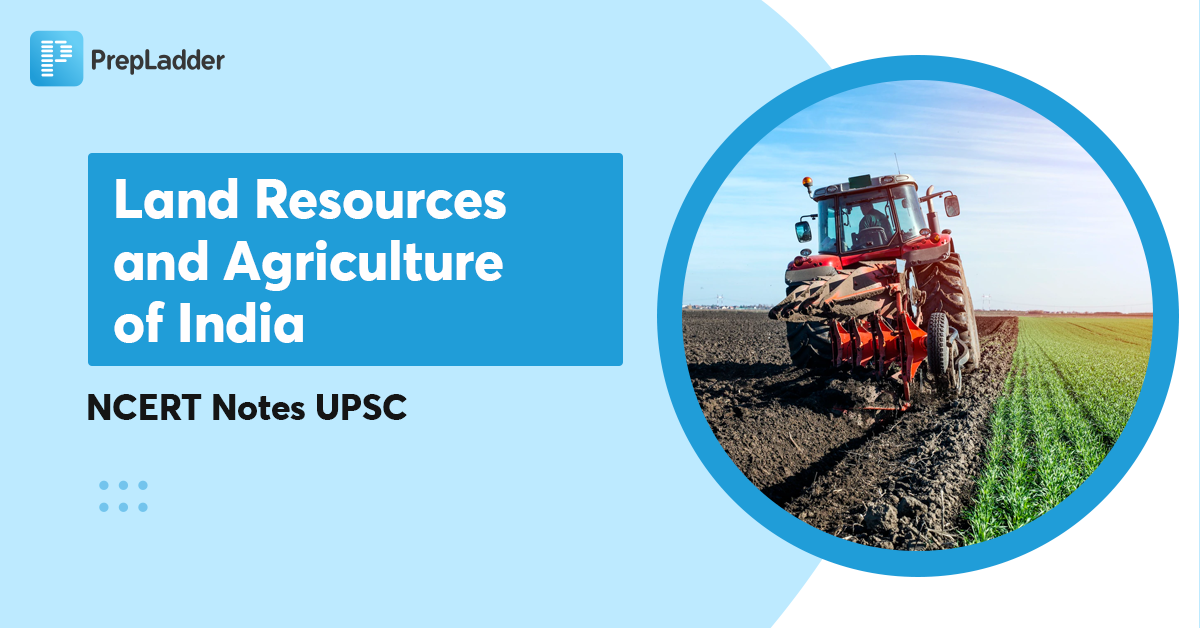 The land is put to different uses. Some land is occupied by rivers, some may have trees and, on some parts roads, and buildings have been built. Different types of lands are suited to different uses. Human beings use land as a resource for production as well as residence and recreation.

Navigate through this detailed blog on Land resources and Agriculture of India to enhance your UPSC exam preparation.

Also Read: What is Urban Farming in India?

Land-use in a region, to a large extent, is influenced by the nature of economic activities carried out in that region. However, while economic activities change over time, land, like many other natural resources, is fixed in terms of its area. At this stage, one needs to appreciate three types of changes that an economy undergoes, which affect land-use.

India has undergone major changes within the economy over the past four or five decades, and this has influenced the land-use changes in the country. Share of area under forest, area under non-agricultural uses, current fallow lands, and net area sown have shown an increase. The following observations can be made about these increases:

The four categories that have registered a decline are barren and wasteland, culturable wasteland, area under pastures and tree crops and fallow lands. Reasons behind decline are:

Land, according to its ownership can broadly be classified under two broad heads:

CPRs provide fodder for the livestock and fuel for the households along with other minor forest products like fruits, nuts, fibre, medicinal plants, etc.

Staying upto date with the latest happenings at national and international level is of utmost importance for IAS aspirants. Read 6 Best Magazines for UPSC CSE preparation.

Land resource is more crucial to the livelihood of the people depending on agriculture:

An estimation of the total stock of agricultural land resources (i.e. total cultivable land) can be arrived at by adding up net sown area, all fallow lands and culturable wasteland.

There are three distinct crop seasons in the northern and interior parts of country.

This type of distinction in the cropping season does not exist in southern parts of India. The temperature is high enough to grow tropical crops during any period in the year provided the soil moisture is available. Therefore, in this region same crops can be grown thrice in an agricultural year.

On the basis of main source of moisture for crops, the farming can be classified as irrigated and rainfed (barani). There is difference in the nature of irrigated farming, as well as based on the objective of irrigation, i.e., protective, or productive.

Classification of Rainfed Farming based on adequacy of soil moisture during cropping season:

Watch a detailed video on Social Forestry by Himanshu Sharma Sir, our Geography faculty and enhance your UPSC CSE preparation:

Cereals: They occupy about 54 per cent of total cropped area in India.

These crops provide us fibre for preparing cloth, bags, sacks and a number of other items. Cotton and jute are two main fibre crops grown in India.

Other Crops: Sugarcane, tea and coffee are other important crops grown in India.

Growth of Agriculture Output and Technology: There has been a significant increase in agricultural output and improvement in technology during the last 50 years.

While it is crucial to thoroughly prepare for the UPSC Civil Services examination, it is equally important to timely evaluate your performance. If you want to check your progress, register for PrepLadder’s Grand IAS Scholarship Test and win upto 100% FEE Waiver on 12-month UPSC GS Dream Pack*

It varies according to agro-ecological and historical experiences of its different regions. There are some problems which are common and range from physical constraints to institutional hindrances.

Constraints of Financial Resources and Indebtedness