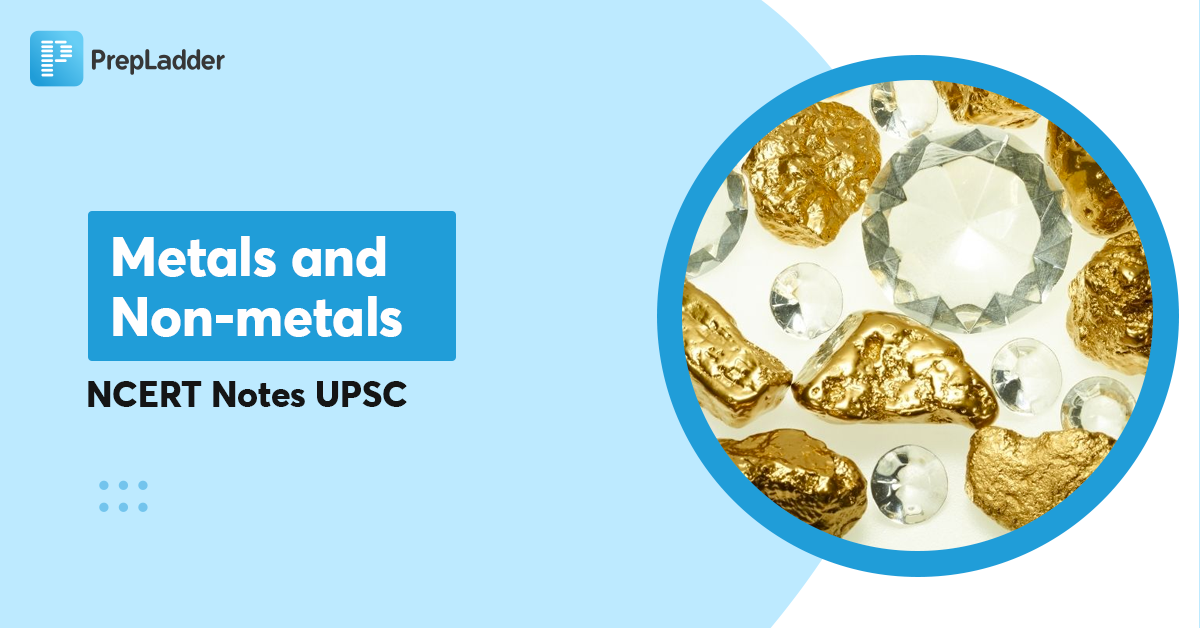 Upgrade your UPSC exam preparation with this detailed article on Metals and Nonmetals and reach a step closer to your dream of cracking UPSC CSE. Elements can be classified as metals and non-metals. Metals (such as iron, copper) can be distinguished from non-metals (such as sulphur, carbon) based on their physical and chemical properties.

Reaction of Metals and Non-metals

The earth’s crust is the major source of metals. Seawater also contains some soluble salts such as sodium chloride, magnesium chloride, etc.

Based on reactivity, metals can be grouped into the following three categories:

Here’s a video lecture on Lower Earth Orbit & Van Allen Radiation Belt  by Sharad Tripathi Sir, our DREAM TEAM faculty for Science and Technology. Watch the video to upgrade your knowledge and your UPSC CSE preparation:

Different techniques are used for obtaining the metals based on their reactivity. Several steps are involved in the extraction of pure metal from ores as shown in Fig. 3.2.

Enrichment of Ores: It is the removal of impurities or gangue from ore through various physical and chemical processes.

Extracting metals towards the bottom of activity series: The oxides of these metals can be reduced to metals by heating alone. For example, Mercury and Copper.

Extracting metals towards the top of the activity Series: These metals are obtained by electrolytic reduction. For example, sodium, magnesium, and calcium are obtained by the electrolysis of their molten chlorides.

Refining of Metals: The extracted metal from the ore is not very pure. Refining involves removing impurities to obtain a pure metal. The most widely used method for refining is electrolytic refining.

It is the gradual deterioration of a metal by the action of moisture, air, or chemicals present in the surrounding environment. For example,

The rusting of iron can be prevented by painting, oiling, greasing, galvanising, chrome plating, anodising, or making alloys.