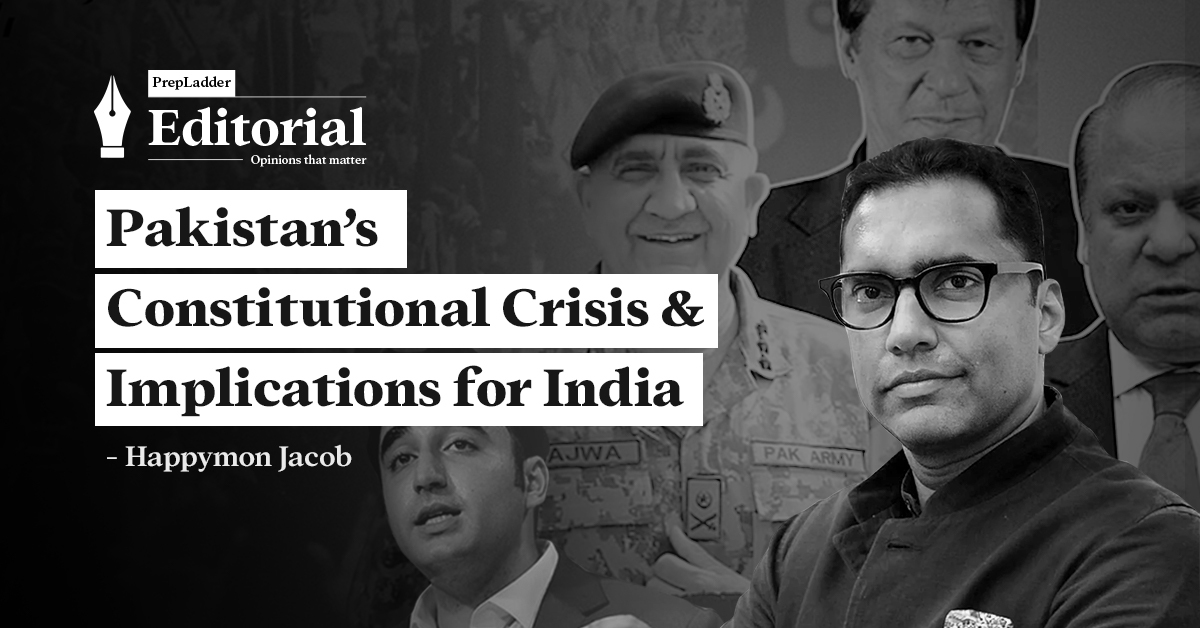 Pakistan is witnessing some interesting political developments which could potentially plunge the country into a constitutional crisis. Pakistan’s Prime Minister, an exceptionally popular former world cup winning cricket captain of Pakistan, was on the verge of losing his majority on the floor of Pakistan’s national assembly when the deputy speaker of the assembly dismissed the motion in a jiffy. Soon thereafter, Imran Khan sent a recommendation to the President of the country to dissolve the assembly and call for fresh elections which the president did. The numbers were simply not in Khan’s favour which made him pull a last-minute surprise and save his job, albeit temporarily. By not giving the democratic process a fair chance, Imran Khan seems to have saved the day for himself, but not for Pakistan.

And yet, it may not be a done deal. The opposition has challenged the decision of the deputy speaker and that of the president and the Supreme Court of Pakistan has taken Suo Moto's notice of what has happened and appointed a bench to go into the matter.

Khan’s decision will have a lasting impact on Pakistan’s fledgling democracy. What Prime Minister Khan has done doesn’t appear to be in keeping with the principles of parliamentary democracy or in accordance with the Pakistani constitution. Article 58 of the Pakistani constitution mentions that “The President shall dissolve the National Assembly if so advised by the Prime Minister” but it adds a note explaining “Reference in this Article to “Prime Minister” shall not be construed to include reference to a Prime Minister against whom a notice of a resolution for a vote of no-confidence has been given in the National Assembly but has not been voted upon or against whom such a resolution has been passed…”. Khan circumvented this constitutional provision by first getting the deputy speaker to dismiss the motion of no confidence. As soon as the motion was dismissed, the president dissolved the assembly and called for fresh elections.

So prima facie, it looks like Khan and the president of Pakistan Arif Alvi, also a member of Khan’s party, have violated the country’s constitution. This, however, is for the Pakistan Supreme Court to judge. What, however, strikes me is the disregard that the deputy speaker, the Prime Minister and the President showed for parliamentary morality as well as constitutional principles.

If my reading of Pakistan’s constitution is accurate and if Pakistan’s SC doesn’t stay this, it will definitely erode the role of constitutional principals in the scheme of things in Pakistan. More specifically, perhaps, the populism of Imran Khan peppered with a messianic complex and religious fervour is something many analysts of Pakistan find deeply problematic.

But the game is still being played out but for the moment Imran Khan is at the centre of it all. That is definitely a victory for someone whose term as the Prime Minister would have been over yesterday. Having claimed a foreign conspiracy, and several other domestic conspiracies to topple his government, he may have made a shrewd move by calling for elections. He can play the victim card during elections unless the SC spoils his plans.

In the run-up to the floor test yesterday, there was a great deal of opposition unity in Pakistan with the opposition considering putting together a coalition government. Khan’s action may now have damaged the opposition unity. For one, while the Pakistan Peoples Party may not be ready for elections in three months, the Pakistan Muslim League (N) is better placed to contest the elections – and there is little reason for them to fight the elections as part of a coalition. On the other hand, armed with conspiracies and populism, Imran Khan may not be too worried about elections. He may actually put up a good show in the upcoming elections.

How does this impact Pakistan’s foreign policy particularly towards India? This by itself may not have any direct impact on India given that while the political government in Pakistan may undergo a change, the military establishment led by the Pakistan army, which for all practical purposes directs the country’s India policy, is not going anywhere. The only caveat is that the current army chief, Gen. Qamar Bajwa retires in November this year. So with a new army chief and a new prime minister in place by the end of the year, one is not sure if Bajwa’s India policy will continue or not.

But to quickly recap, there has been relative bilateral peace between the two sides at least for the past one year and a little, which is a big deal in India-Pakistan relations. This state of ‘cold peace’ where peace was maintained despite the absence of engagement or dialogue was primarily due to Gen. Bajwa’s desire to keep it that way and because the two countries were busy with other issues (India with China, and Pakistan with Afghanistan). Given that Imran Khan was also a good book of the Pakistan military for a considerable period of time, the civil-military consensus on India also worked well for relations with India. In short, therefore, I would expect the current state of relations to continue at least till the end of the year.

It is also interesting to note that while Imran Khan has been accusing the US of conspiring to topple his government, the Pakistan army chief has been reaching out to the US. He not only spoke up against the Russian invasion of Ukraine, which pleased the American ears but also said Pakistan wants good relations with the US. So while there appears to be some civil-military tension with regard to Pakistan’s approach to the US, the army’s view is likely to prevail over time. It is a different matter, however, that New Delhi will have to closely analyse what the warming up of Islamabad and Washington DC would mean for India.

Significance of the Modi-Kishida Summit