Bird Flu and The Challenge it Poses in a Warming World 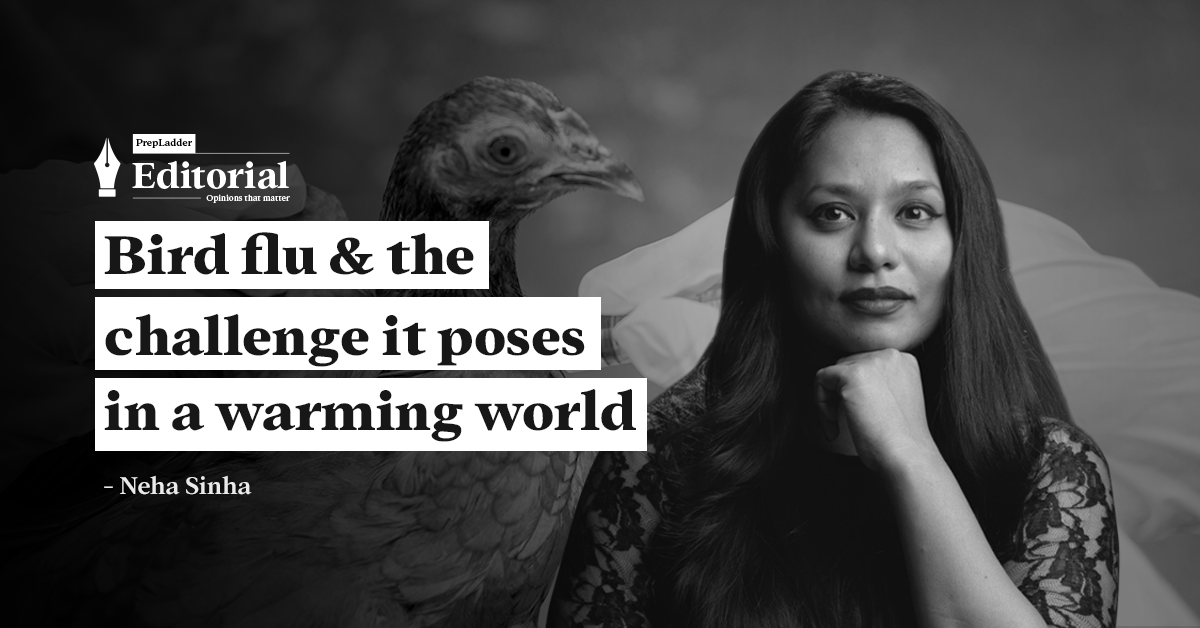 Disease is difficult to diagnose in people, but in animals, this often becomes even more difficult. Many viral diseases move between groups of wild and domestic animals, and some diseases move from animals to humans (as COVID-19 is suspected to have done). Climate change is expected to unleash many more viruses into the world. Warming temperatures are generally thought to be more conducive to the spread of disease. New variants of viruses may also occur as disease spreads over landscapes.

One threat that India faces with great regularity is that of bird flu. Scientists across the world are trying to understand and tackle bird flu, which can infect domestic birds like chicken, with some variants also infecting people.
Sadly, bird flu is also occurring in wild birds that come to India after long migrations. While some outbreaks have been diagnosed, others are yet to be diagnosed. A wild animal will typically die alone, and sometimes we may take a long time to know if there is a disease in the wild. However, in some outbreaks, many birds/animals will die together. Mass deaths are one way of knowing that there is disease or contamination – by that point, an entire area may need to be sealed off.

Bird flu can originate from wild birds to domestic poultry, causing huge economic losses. Additionally, H5N1 is a strain of bird flu that can infect humans.

Scientific evidence points that a series of man-made processes have changed disease distribution and increased the risk of disease spread and pandemics. Some of these man-made processes include landscape fragmentation, unsustainable land-use choices, pollution, ecosystem disruption and climate change. Wild animals and humans share many pathogens. The spread of pathogens and viruses like bird flu (also known as Highly Pathogenic Avian Influenza, or HPAI) can disrupt public health, food production, livelihoods and wider economies.

The Food and Agriculture Organisation estimates loss from HPAI outbreaks since 2003 runs into billions of dollars globally. As an example, the cost of the 1997 outbreak in Hong Kong, may have been hundreds of millions of dollars.

Demoiselle cranes are the smallest cranes in the world. This beautiful bird migrates to India every year. In Rajasthan, locals revere the species, wait for them to arrive each year and even feed them. Sadly, several cranes died this year of suspected bird flu.

In Andhra Pradesh, spot-billed pelicans also died together. This was a suspected nematode (worm) attack. And in Maharashtra and Bihar in 2022, we have also had bird flu outbreaks in poultry farms – about 900 birds have died.

This is where the learnings from One health come in.

The World Health Organisation (WHO) has suggested the ‘One World One Health’ approach to tackle disease and flu spread. This approach emphasises the interdependence of humans with the wild and tries to understand the connectivity between the health of humans and domestic livestock along with wildlife. In simple words, the One health approach advocates that in order to tackle the disease, ecosystem health and wildlife and human health should be linked. We must study the interlinkages of both wild nature and domestic, human-controlled systems. In many cases, for example, this will mean monitoring both wetlands where wild birds come and poultry farms and keeping the two separate. It will also include sustainable food production, controlling pollution in the environment (such as wetlands) and physically preventing the mixing of domestic and wild animals.

India’s Commitments Under the Convention on Migratory Species

India is a member of the United Nations-led Convention on Migratory Species. The CMS calls upon member countries like India towards preventing the spread of bird flu. UNEP/CMS/Resolution 9.8 states:

India now has to create a framework for bird flu surveillance and monitoring, combining the strength of government, non-governmental organisations, local citizens, and laboratories. All district administrations must be briefed on the issue of animal disease, the ecology of pandemics and action plans.

As we slowly recover from the COVID-19 pandemic, it has never been more urgent to understand the spread of disease in both the domestic and natural world.